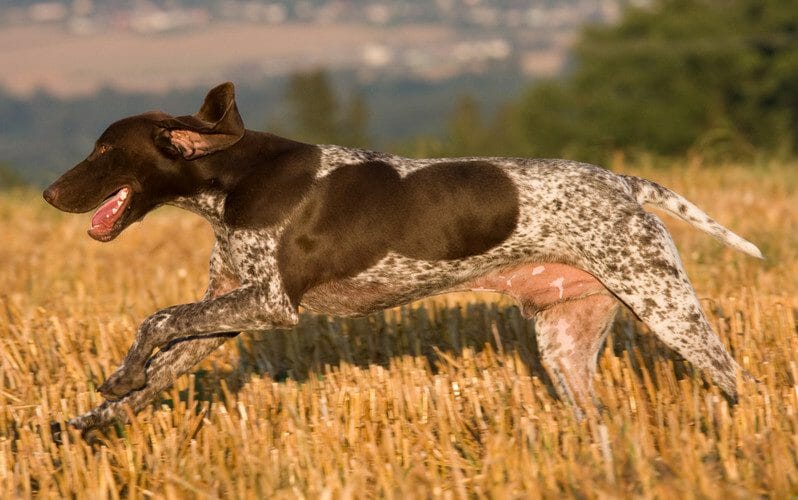 The German Shorthaired Pointer dog (GSP) is a medium to large athletic canine breed that traces its origins to the 17th century. The breed was established in the 19th century as a multi-purpose hunting dog.

The breed came from the German Bird Dog, which resulted from crossing a Bloodhound and Spanish Pointer. Later, Pointers from England were used to further refine the breed. In addition to their keen noses and hunting prowess, German Shorthaired Pointers are elegant and stylish. They are capable hunters both on land and in the water.

An early adopter of the breed, Prince Albrecht zu Solms-Braunfels of the Royal House of Hanover, actively encouraged breeders to increase their numbers.

In 1925, the first German Shorthaired Pointers were sent to the United States. Breeding was taken up in Montana by Dr. Charles Thornton. After just five years, the American Kennel Club officially recognized the breed.

During World War II, the breeding of German Shorthaired Pointers slowed down. As the war ended, many German breeders were forced to hide their valuable possessions. This meant their stock of GSPs was sent for safekeeping to Yugoslavia. After the war was over, Yugoslavia proved to be a difficult place for West German breeders to retrieve their dogs. As a result, the breed needed to be rebuilt using the limited stock available.

However, in the United States, GSPs had been actively bred, and their numbers remained strong. In 1968, three out of four of the dogs that finished at the AKC National Field Trial Championship were German Shorthaired Pointers. 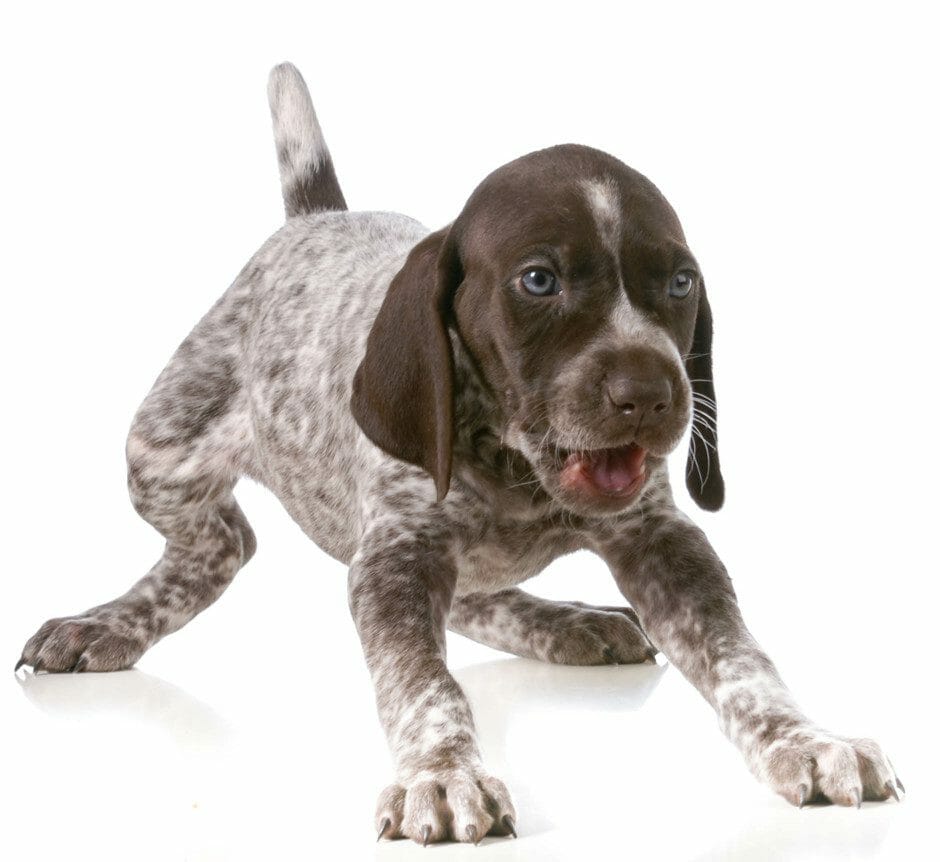 Noted for their regal appearance, the German Shorthaired Pointer has a good posture. Females stand at approximately 21 to 23 inches and weigh between 45 to 60 pounds. Male GSPs are 23 to 25 inches tall and weigh between 55 to 70 pounds.

German Shorthaired Pointers have large floppy ears, big noses, and dark eyes that are almond-shaped. Their coats are usually black and white or liver/reddish-brown and white with distinctive spotted or speckled patterns. However, they can occasionally be solid in color. The color of the dog’s nose will always match its coat. 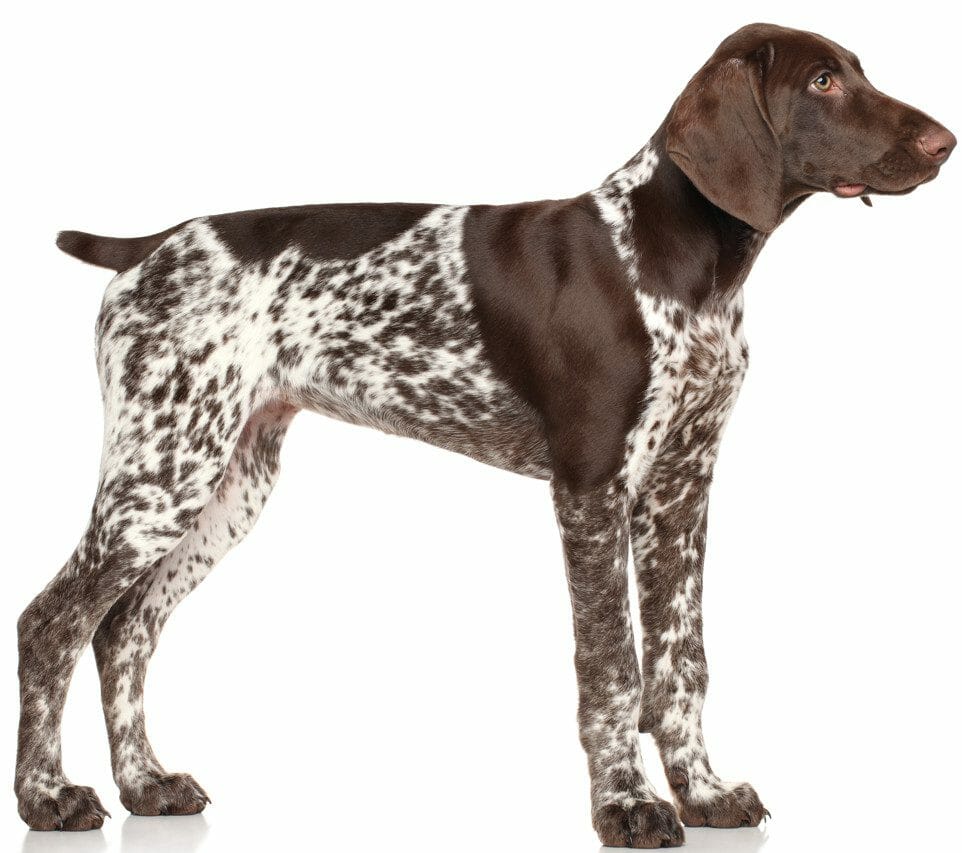 As agile hunting dogs, GSPs have a high prey drive. This means that they will naturally give chase to smaller animals that they see. Fortunately, with positive reinforcement, it is possible to teach these dogs how to behave around other animals.

German Shorthaired Pointers are friendly toward strangers and other dogs. Typically, the breed is well=-suited to homes where there is a young family as they can be very playful. As with any pet, it is important to supervise the GSP during play with children. It is also essential that the child knows how to safely interact with the dog. Although not known to bark excessively, a GSP will alert its owners to the presence of a visitor to the home.

As with many dogs, boredom can be an issue that affects the German Shorthaired Pointer. Given the breed’s intelligence and aptitude for work, they can become restless, destructive, or try to escape when left without a purpose. To stop these dogs from getting bored, occupy their time with interactive puzzle feeders, exercise, and games to keep them mentally active. 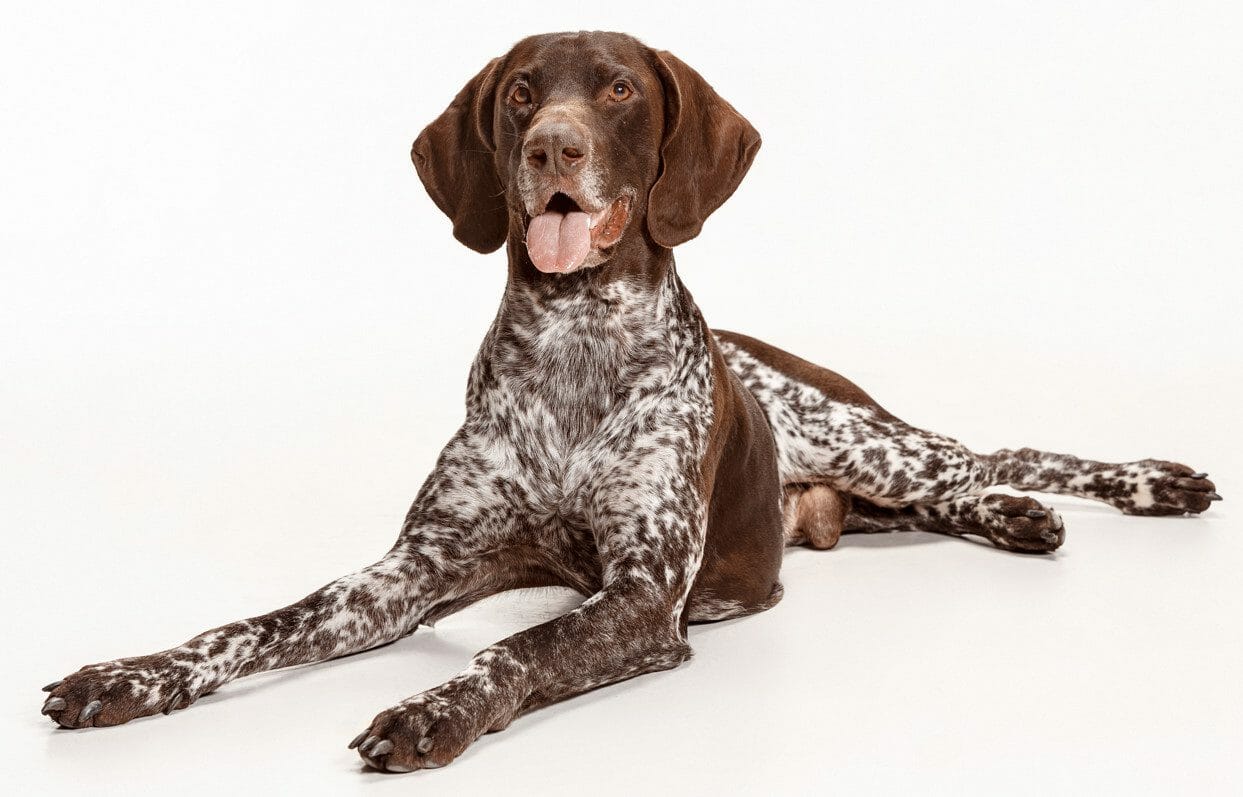 How to Train a German Shorthaired Pointer

German Shorthaired Pointer training should be provided at an early age. Given the breed’s natural urge to chase other animals and to explore and hunt, it is particularly important that training is provided to get the dog into good habits. Training should always be positive and never punitive. Owners should reinforce good behaviors by rewarding the dog with treats or praise.

Socialization is also important. Enrolling a young pup in a training class will get it used to being around others. Walking a GSP in busy areas and finding opportunities to interact with other humans and dogs will also improve its social skills and help to build confidence. 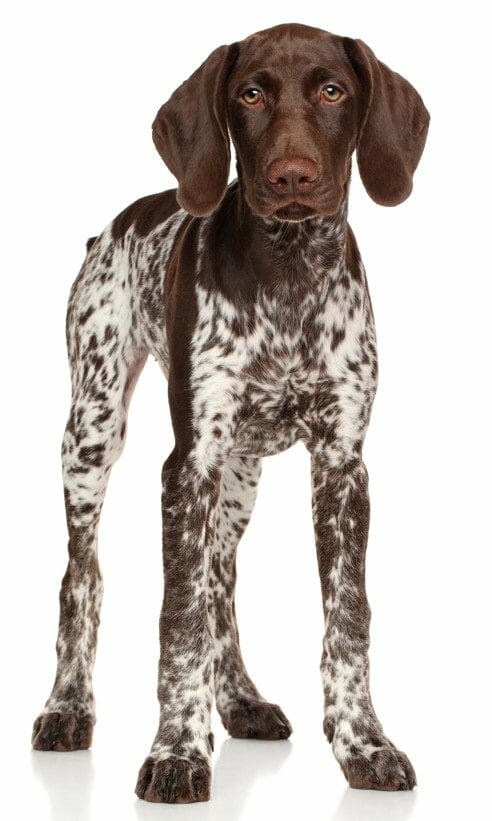 Grooming a German Shorthaired Pointer is relatively straightforward. The occasional brushing and bath are all that is required throughout the year, with an increased frequency as the seasons change and shedding becomes more frequent. In comparison to many other breeds, the GSP does not shed excessively.

Nails should be clipped regularly. In addition, ears should be kept clean to prevent ear infections and ear mites. 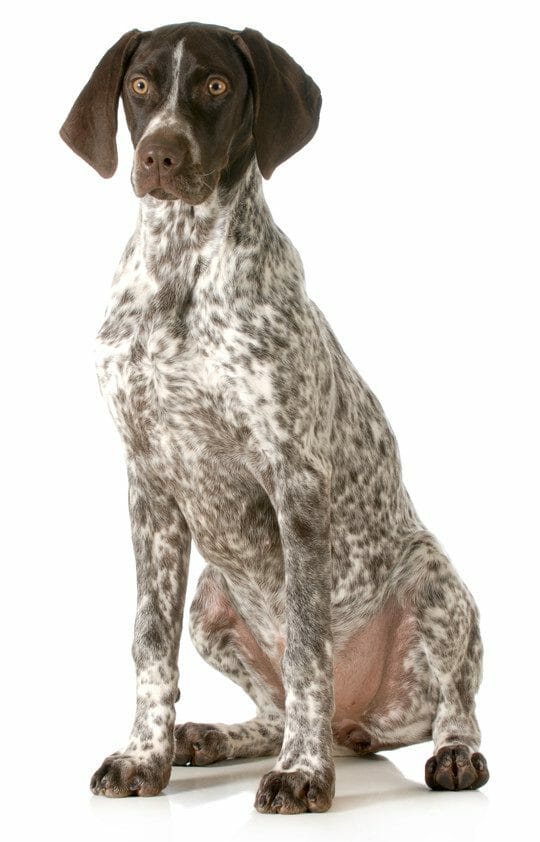 The German Shorthaired Pointer has a lifespan of 12 to 14 years. Although generally healthy, the GSP is more prone to the health conditions described below.

BarkWiki recommends that German Shorthaired Pointers received regular check-ups from a veterinarian and receive all recommended vaccinations. In addition, preventive medication for fleas, ticks, and heartworm should be provided. These types of medications can help prevent health problems such as Lyme disease.