How Do Dogs Get Ear Mites?

Tiny, microscopic parasites that go by the scientific name of Otodectes cynotis may be the culprit responsible for the constant itching and scratching canines frequently experience. Commonly known as ear mites, these eight-legged arachnids wreak havoc on the linings of the ear canals of dogs and cats alike. These bugs enjoy feasting on the waxes and oils of the external ear canal, much to the pup’s dismay.

Canines stricken with ear mites most likely first received them from another mite-infested dog or its environment. They are easily spreadable from dog to dog, usually through socialization. Canines that are playing outside a majority of the time are more likely to contract them. In addition, dogs with poor immunity (such as those that are young, old, or sick) are most vulnerable to mite infection.

Those asking “what do ear mites look like?” may not receive the answer they hoped for. It can be quite difficult to spot the mites, considering some are undetectable to the naked eye. In most cases, a vet will have to use an otoscope or microscope to see the pesky parasites.

Under a microscope, the miniscule mites can have a white or red appearance. While in the ear, mites on dogs often reproduce and lay eggs in the external ear canal. If the mites continue their residence in the ear unnoticed, the eggs can hatch in a matter of days or weeks. As might be expected, this will worsen the situation. 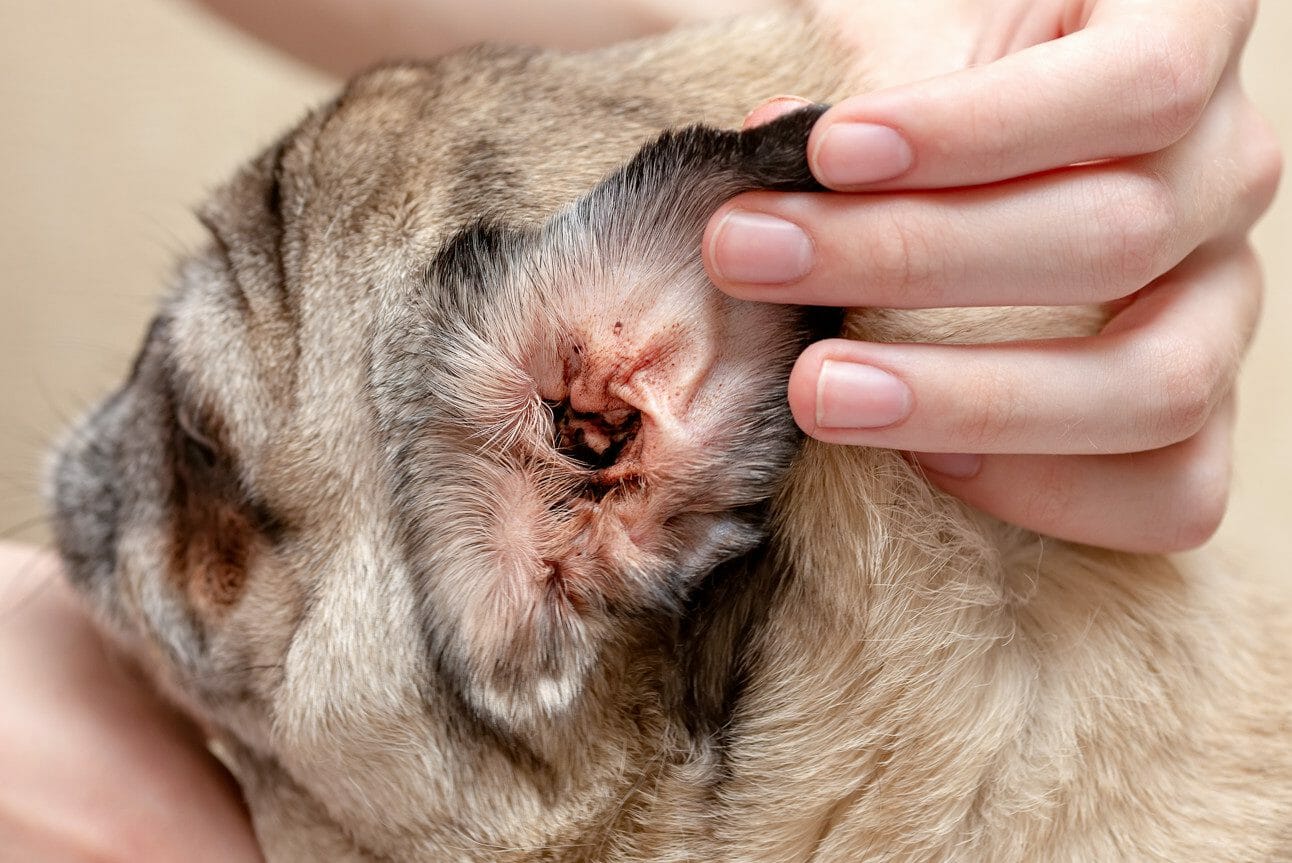 Symptoms of Ear Mites in Dogs

When ear mites have made a home of a canine’s ears, it is nearly impossible not to notice. Although the bugs do not actually bite the dog, the constant nibbling on its ear lining can annoy and irritate the canine to no end.

The following signs of ear mites in dogs should be taken seriously, and ear mite treatment should be sought after if these signs are seen frequently or if many of them occur together.

These are classic symptoms of ear mite infestations. It is crucial to remember these parasites can quickly spread from animal to animal. Because of this, if mites have been detected in a canine, the dog and the environment it lives in should be quarantined, and an in-depth cleaning and sanitization of the living spaces is recommended.

If a canine is suspected of having these parasites, a vet should be visited and consulted on the best way to get rid of ear mites in dogs. The possibility of the mites spreading to other animals and other parts of a canine’s body should motivate the owner to reach out to a veterinarian sooner than later.

If a canine is brought to a vet to determine if ear mites are present (as is highly suggested by popular sites like Chewy and Petco), the vet will use diagnostic measures to identify the issue. The discharge from the dog’s ears may be sampled and sent to a lab for analyzing. However, some infestations are severe enough to where the vet can diagnose the case merely based on examination. A quick Internet search will reveal some dog ear mite pictures of what a severe case can look like.

Although some pet owners will be tempted to diagnose a canine based on an Internet search, it is preferable that they allow a vet to do the diagnosing. Countless conditions (such as ear infections) can share more or less of the same symptoms. A vet will be able to tell without a doubt if a mite is the instigator of the issue or not. The main takeaway from this should be that a vet needs to be consulted before any diagnosing or ear mite treatment is performed for suspected mites.

One of the first steps in treating a dog with mites is to clean out the ears with an antiseptic, antibacterial, or anti-parasitic solution specially made for canines. A vet will be able to recommend the best cleaning agent for flushing out the ears based on the severity of the infestation. Keeping the ears clean and disinfected is essential to keeping the mites from returning.

A veterinarian will more than likely either recommend an over-the-counter medication or issue a prescription for an ear mite medicine for dogs. The medication is normally administered topically or injected into the ears. Many of the new, technologically-advanced medications are single doses that can kill off mites in one application. Some canines may require multiple doses or injections. Ivermectin, Moxidectin, and Selamectin are commonly used in treatment of parasites.

There are some home remedies for ear mites in dogs that work well. However, a vet should be consulted about whether or not the canine would benefit from a particular remedy. Some canines may be allergic to or adversely affected by various home remedies. No matter what treatment method is chosen, a vet will know what is best for the dog given its health history and current situation and should be consulted before treatment is given.

Cleaning the canine’s home is also an integral aspect of ridding a dog of mites. They cannot survive long in a sterile environment. For this reason, a canine’s living space and fellow pets should be kept clean and sanitized throughout the ear mite treatment course. 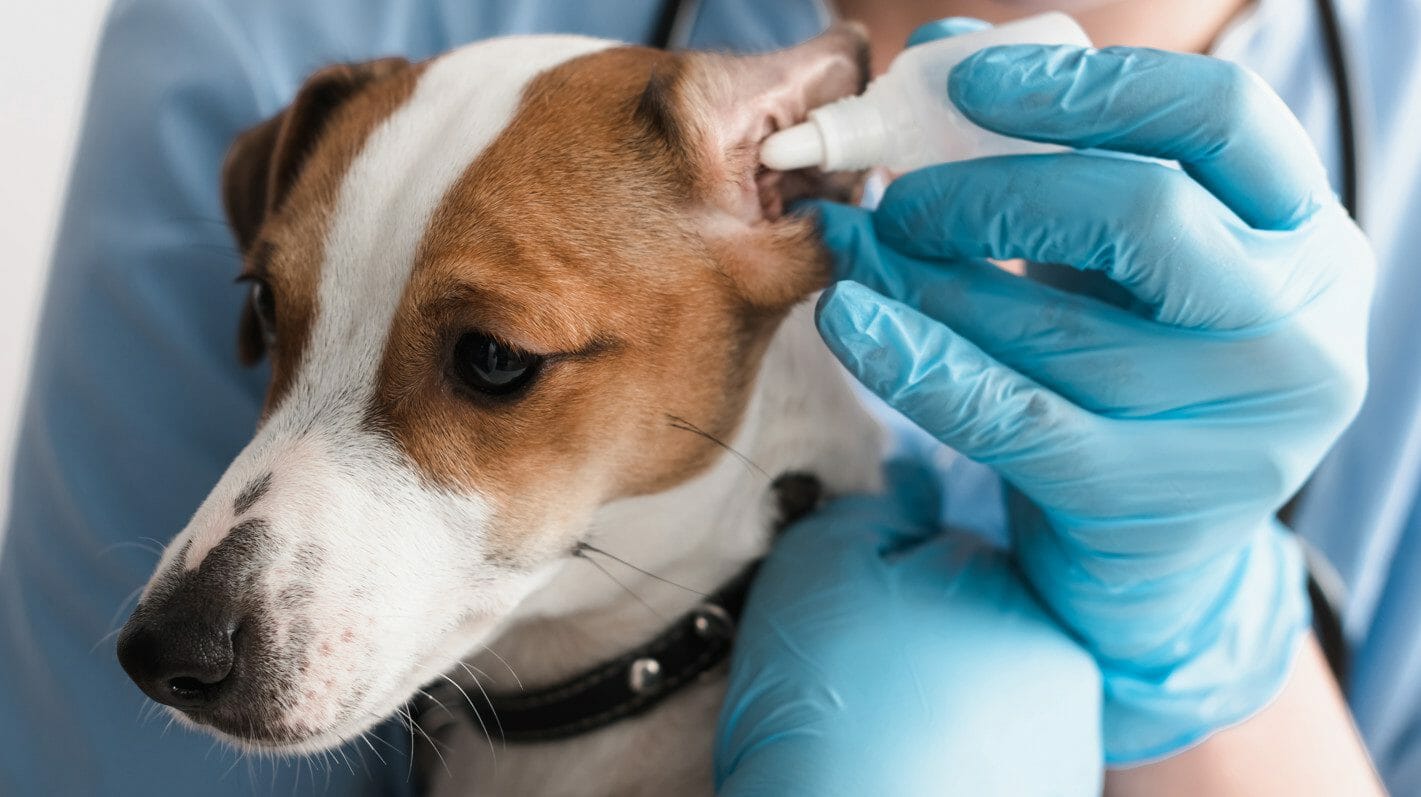 Is Mange Associated with Mites?

If a canine has a tough, scaly, reddened patch of skin, it may have what is known as mange, which is caused by Demodex mites in dogs. Demodectic mange is caused by tiny mites that burrow deep in a canine’s hair follicles. In this type of mite, sometimes the only damage they noticeably cause is loss of hair and inflamed skin.

The skin often remains like this for many years with the mites concealed from the naked eye. Some dogs are infected with mange since early in life, having received them from their mother. In dogs with strong immune systems, this is usually not a problem, and a dog can live unbothered with it. In dogs with weaker immunity, it is a different case and more serious symptoms may come into play. If symptoms become noticeable and Demodex mites are thought to be the cause, a visit to the vet can clarify and treat this.

Find a vet and make sure your dog gets treated right away.