What Is Lyme Disease In Dogs?

Lyme disease in dogs (as well as humans) is contracted through the bite of a deer tick carrying the bacterium Borrelia burgdorferi. So, the answer to the question “can dogs get Lyme disease?” is a resounding yes. Unfortunately, dogs tend to be harbors of refuge for ticks all year long. However, ticks are most prevalent in the summer months when the humid environment creates a perfect breeding ground.

As previously mentioned, the bacterium Borrelia burgdorferi is carried by ticks and transmitted to the host. Ticks are the sole cause of Lyme disease in canines and people. However, not every tick bite will cause a canine to develop an active form of the infection. In 90% of cases, a canine subjected to this tick-borne illness will only harbor an inactive and harmless form of the illness.

However, in active forms of Lyme disease, symptoms will begin to arise within 48 hours after infection by a tick bite. If symptoms begin appearing, the canine should be immediately taken to the vet for examination. Lyme disease can quickly spread to vital organs of the body and wreak havoc, so time is of the essence.

Where Do Ticks Come From?

Ticks are common in most places around the world. In the United States, ticks are seen predominantly in the western and eastern coastal areas, as well as the flatlands of the Midwestern states. No matter where a tick may be geographically, ticks are most commonly found in areas of lush greenery. They live on trees, plants, and shrubbery while waiting for a passing victim to climb onto.

In the 10% of symptomatic Lyme disease cases, the joints and the kidneys are typically affected more severely than other areas of the body. For some reason, the infection tends to settle in these specific parts of the dog’s body. As a result, the canine experiences periods of lameness and swelling in its legs. Dogs with Lyme disease also tend to suffer issues related to kidney functioning. This is why it is critically important for signs of of this illness to be monitored and taken seriously. Otherwise, this illness can lead to damaged organs and a weakened body.

Listed below are the six primary symptoms of Lyme disease typically seen in canines:

Each of these symptoms are also common in many other medical conditions that affect canines. Because of this, a vet should be seen if these symptoms arise and fail to go away. The vet will be able to nail down what is at the root of the symptoms. The dog will then receive whatever treatment is deemed necessary by the vet.

What If My Dog Tested Positive for Lyme Disease But Has No Symptoms?

If a canine tests positive for Lyme disease but has no symptoms, the dog is harboring an inactive amount of the bacterium. This represents the majority of Lyme disease cases in canines. This is the best possible outcome because the illness will not harm the dog or the others around it.

What Does It Mean If My Dog Has Lyme Disease and Is Limping?

In more severe cases of Lyme disease in dogs, limping is to be expected. The bacteria tends to attack the joints—causing subsequent lameness in the legs.

The only known tick that carries and transmits Lyme disease is the deer tick (also known as a black-legged tick). Contrary to what some believe, dog ticks, Lone Star ticks, and other types of ticks are not known to transmit Lyme disease. 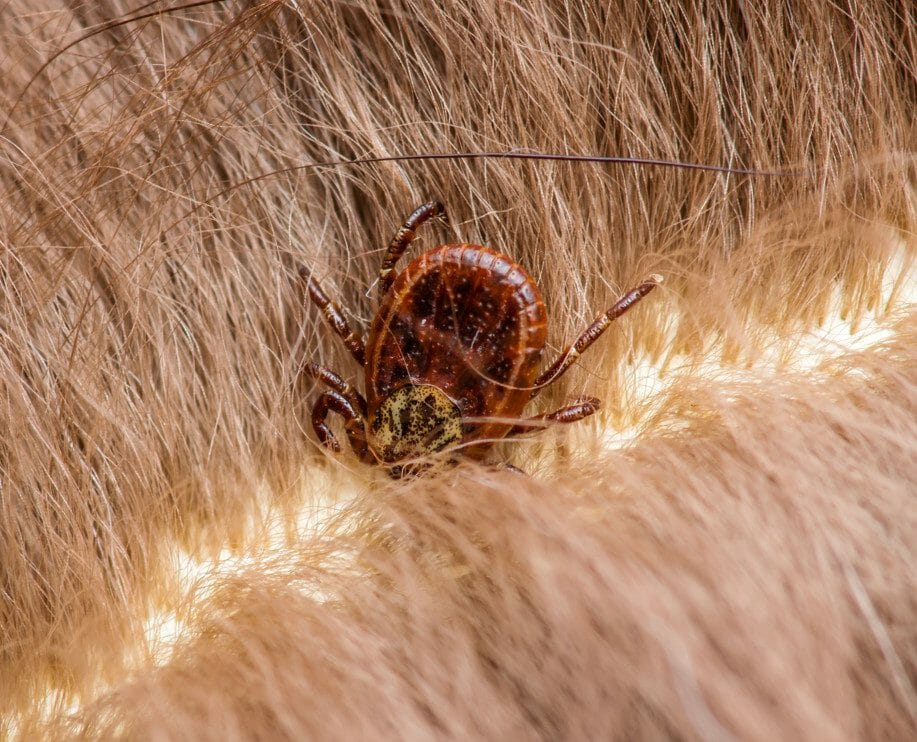 Who Can Get Infected If My Dog Has Lyme Disease?

How Effective Is the Lyme Disease Dog Vaccine?

The vaccines for Lyme disease in dogs are fairly effective, but they can be hit or miss. Every owner that plans on getting the vaccine for their canine should always seek prior authorization from a vet.

Some dogs have preexistent medical problems that render it dangerous for the canine to receive the vaccine. For that matter, veterinary approval should always be sought before any medication, vaccine, or at-home intervention is used on a dog or animal.

One way to help prevent Lyme disease in dogs is to use flea and tick prevention medicine throughout the year (not just in the summer months). Topical and oral flea and tick medications can be found at Chewy.com.

Are Any Side Effects Associated with the Vaccine?

There are some usually harmless vaccine side effects that accompany a Lyme disease vaccination. The most common are sleepiness and slight discomfort following the administration of the vaccine. Nevertheless, it is possible for a canine to have an adverse reaction to the vaccine. If an adverse reaction is taking place, the following symptoms may be observed within hours of the shot being given:

If these symptoms are occurring in close frequency and the dog is not improving, the dog should be taken immediately to the vet’s office.

Because Lyme disease is caused by a bacterial infection, a regimen of antibiotics is used to fight off the illness. Vets will often prescribe doxycycline treatment for the dog. This treatment can be administered at home. If the illness is caught early and antibiotics are promptly given to the dog, treating Lyme disease in dogs can be a relatively low maintenance and easy task for the dog’s owner.

How Long Can a Dog Live with Lyme Disease?

Unless a dog is not brought to a vet and its condition is ignored, a dog with Lyme disease rarely dies. Although this tick-borne illness can significantly damage the dog’s kidneys and debilitate the use of its joints, this can usually be avoided if the dog is given immediate treatment by a qualified vet.