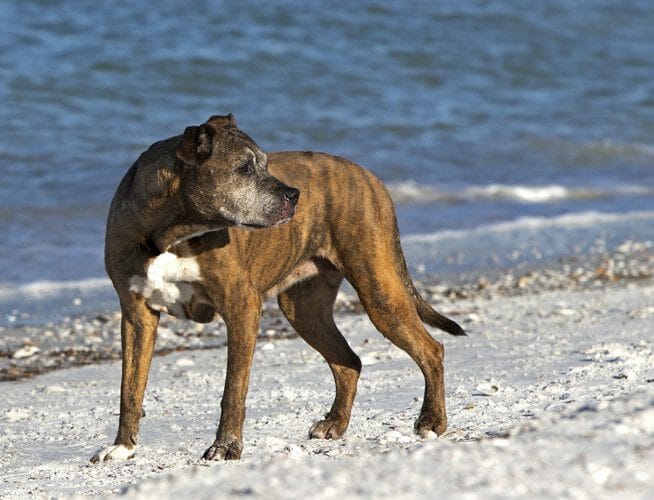 The American Pitbull Terrier is a well-loved breed that has sometimes courted a degree of controversy. Despite the breed’s reputation for aggression, Pitbulls are loving and affectionate dogs that make great pets given the right home and training. Pitbulls are frequently crossed with other breeds, and these mixes have a character and charm of their own. The range of temperaments and variety found in the appearance of these top Pitbull mix breeds are endearing and fascinating.

Read on to learn more about some of the top Pitbull mix breeds, their personalities, and any potential health concerns. Keep in mind that many of these crossbreeds may not be recognized as an official breed by the American Kennel Club (AKC). 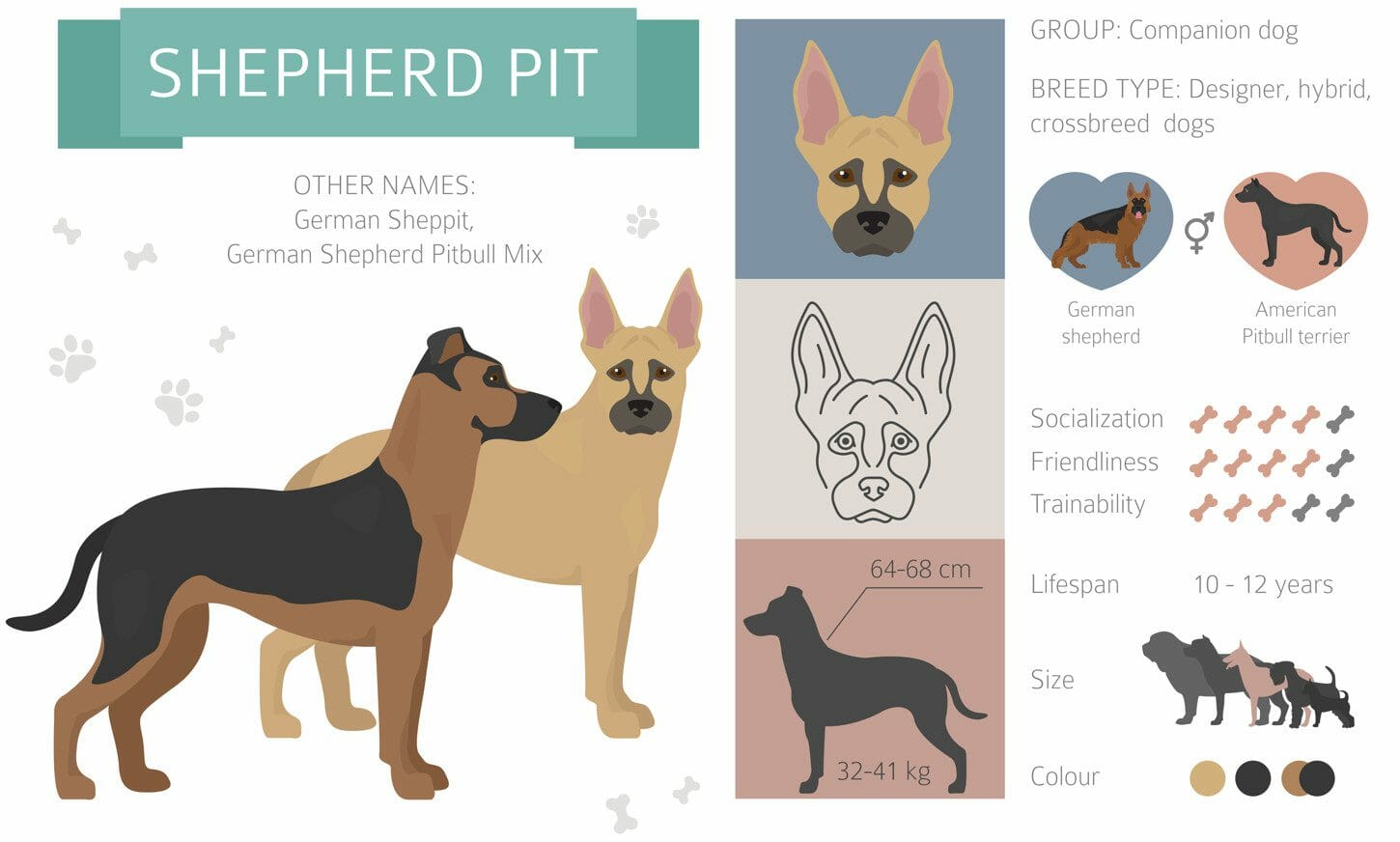 These beautiful mixed breed dogs are intelligent, quick to learn, affectionate, eager to please, and quite loyal. Despite both German Shepherds and Pitbulls being characterized as aggressive breeds, the Pitbull German Shepherd mix can thrive with the right environment, training, and socialization.

This crossbreed is prized for its mix of loyalty and discipline. However, without proper training beginning in puppyhood, these dogs can become stubborn and dominating. At least 90 minutes of daily exercise is recommended for this energetic breed.

Common coat colors can include black, brown, and black with tan. Standing between 18 and 24 inches tall and weighing between 40 and 90 pounds, a German Shepherd Pitbull Mix has a lifespan between 10 to 12 years. Most mixes tend to favor the Pitbull look with a broad head and shorter muzzle. Health issues faced by this top pitbull mix breed include hyperthyroidism, hip dysplasia, bloat, heart disease, as well as allergies and skin conditions.

Perhaps the most unusual and rare of the top Pitbull mix breeds is the Chihuahua Pitbull Mix (also known as a Chipit). This mixed breed dog is intelligent but can be stubborn at times and will require training and socializing from a young age. They require lots of exercise and entertainment and room to burn off energy and fight off boredom. These dogs can be very loyal and quite defensive around strangers.

These fun and lively dogs can grow up to 20 inches tall and weigh around 20 pounds. However, they can be smaller if they take after the Chihuahua parent more than the Pitbull parent. Their bodies are usually short and broad, and their coats can be black, white, gold, brown, tan, or brindle.

These active and social dogs tend to be overall healthy and typically live 13 to 14 years. Some possible health issues to be aware of include patella luxation, hip dysplasia, collapsed trachea, and heart problems.

Faithful, energetic, and powerful, the Pit Bull and Boxer mix is another dog that is often found in shelters. As a breed, they are loyal, protective, and good with children. However, it is critical to socialize and train Bullboxers from a very young age.

Weighing between 50 and 80 pounds and standing at a height of 16 to 20 inches, the males are typically much larger than females. However, these stocky and sturdy canines are generally described as mid-sized dogs.

A Pitbull Boxer mix has a lifespan between 10 and 14 years. Health concerns associated with these top Pitbull mix breeds include cardiomyopathy, hip dysplasia, demodectic mange, and obesity caused by overeating.

The Pitbull Great Dane mix is an intelligent, patient, and loving canine. Despite its large size, the breed typically has a long lifespan of up to 14 years. As Great Danebulls enjoy time with their families, separation anxiety can be an issue. Therefore, it is important to avoid leaving them alone for long periods.

Their coats are solid in color or combine two colors, with common colors being bronze, black, white, fawn, red, white, and brown. Patterns can include merle, harlequin, sable, or brindle. These crossbreed dogs can grow up to 28 inches tall and weigh between 60 and 90 pounds. Because of their short fur, they don’t handle cold well. Health issues may include hyperthyroidism, eye defects, hip dysplasia, and bloat. 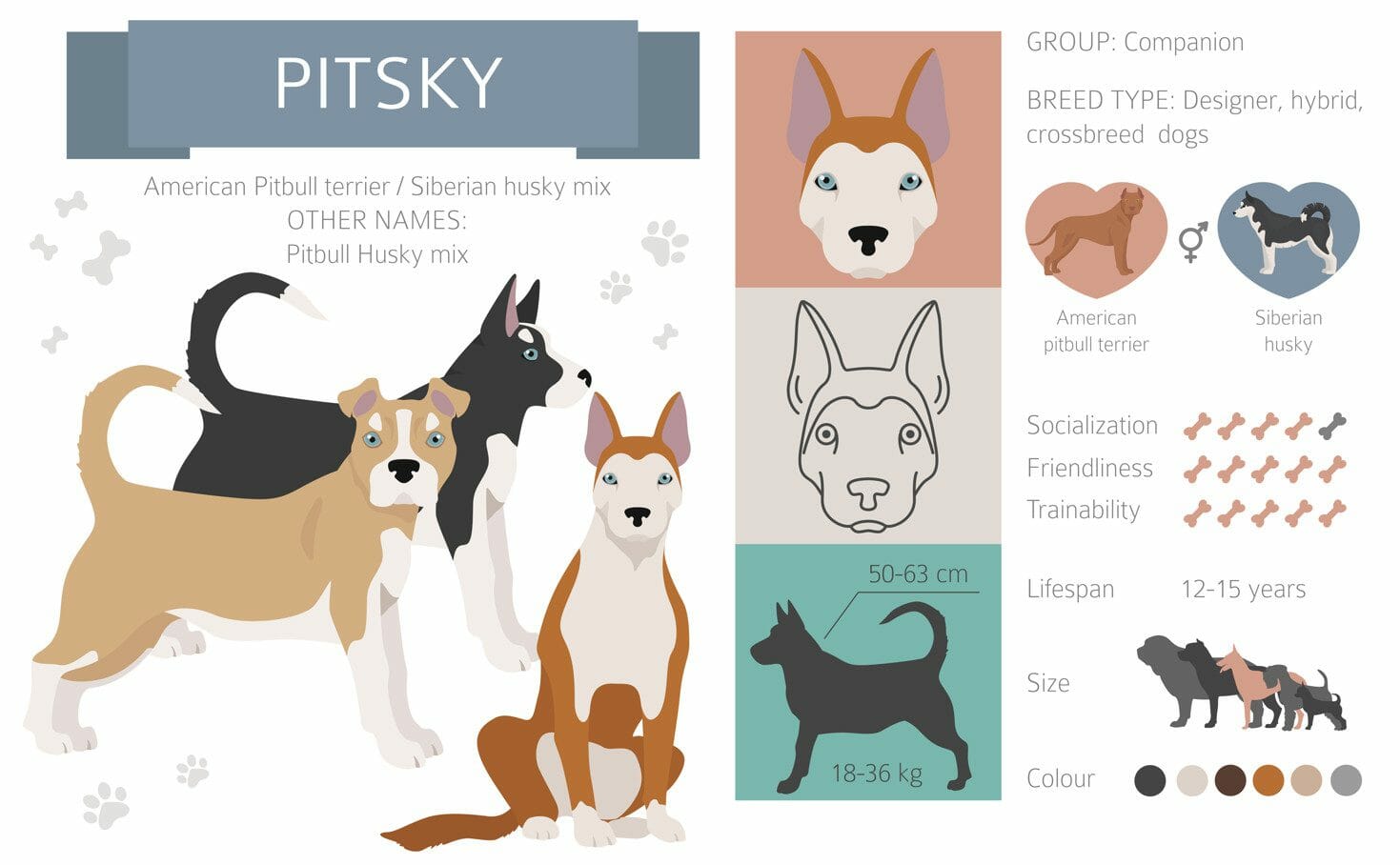 A Pitsky is a cross between an American Pit Bull Terrier and a Siberian Husky. These crossbreeds are very energetic dogs that need an active lifestyle. A Husky Pitbull Mix can be demanding and require considerable maintenance. It is recommended that these dogs live with experienced dog owners. That said, these mixed breed dogs are typically child-friendly and eager to please.

Standing between 16 and 25 inches tall, these top Pitbull mix breeds can weigh between 30 and 80 pounds. It is difficult to tell how large these puppies will grow. Their short coats are typically white, black, grey, brown, brindle, or a combination. With a lifespan ranging between 12 and 15 years, common health concerns to be aware of include cataracts, hip dysplasia, hyperthyroidism, and allergies.

When a Pit Bull is mixed with a Boston Terrier, the result is an active, affectionate, and sociable dog that makes a good pet for a family with older children. Overall, a Pitbull Boston Terrier Mix is attentive, cheerful, and has an even temper.

Standing between 17 and 18 inches tall, the Boston Terrier Pitbull mix can typically weigh anywhere from 25 to 50 pounds, depending on the dogs from which they were bred. Their short and shiny coat can be black, brown, red, brindle, or black and white. These canines have triangular ears that point upward, as well as a strong gait and the potential for a flattened face.

Early positive reinforcement training and socialization will be needed with this type of dog, as they can be stubborn and may have difficulty getting along with other dogs. Obesity can be an issue with the breed, so it is important to maintain a good diet and exercise routine. With a flattened muzzle, there is a risk of brachycephalic syndrome which can be made worse if the dog becomes overheated.

Loyal and energetic, the Lab Pitbull mix (sometimes referred to as a Labrabulls or Pitadors) is a designer dog breed that often finds its way to animal shelters. For this reason, they are best-suited to experienced dog owners. These intelligent and easy-to-train top Pitbull mix breeds can be vocal at times and do not like being left home alone for long periods. They require lots of exercise and benefit from early training and socialization.

Labrabulls can have brown, black, white, silver, or yellow short-hair coats. However, most have a black coat with white accents These medium-sized canines stand between 20 and 24 inches tall, can weigh between 45 and 90 pounds. Healthwise, this breed faces the same health issues as Pit Bulls and Labrador Retrievers, which include OCD, hyperthyroidism, bloat, and epilepsy. They have a lifespan of 10 to 14 years.

The loveable Basset Hound Pitbull mix stands between 15 and 17 inches and weighs between 40 and 60 pounds. The average lifespan is between 12 and 16 years. The body is compact with a short coat. However, because the two breeds are so different, the results of crossbreeding can result in unexpected results making their appearance one of the least predictable of the top Pitbull mix breeds. However, this mixed breed tends to resemble a Pitbull more than a Basset Hound.

Although not the easiest canine to train, the breed is generally found to be good with children, but less so with other dogs. Common health concerns include hip dysplasia, hypothyroidism, glaucoma, cardiac disease, skin and coat allergies, and brain disorders. 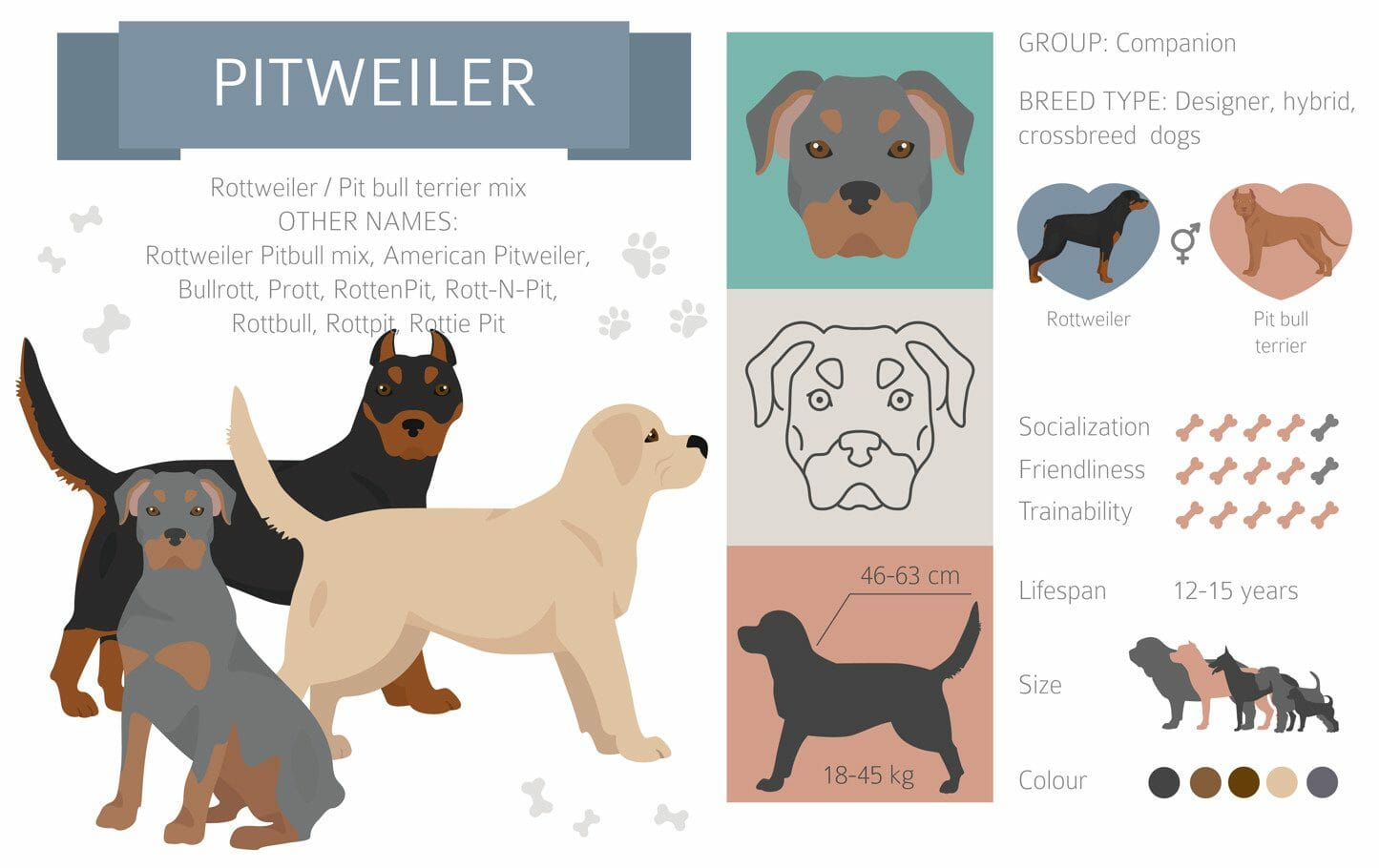 Although Pitweilers may look fierce, these canines are loving, intelligent, and energetic. These well-built, muscular dogs make loyal pets when given the right training, socialization, and home environment. They require daily exercise. They are one of the most powerful top Pitbull mix breeds

A Pitbull Rottweiler mix is strong-willed and powerful. It is important that any children that meet this breed are taught how to treat them with respect. Their short, smooth coat can be brown, black, white, blue, red, brindle, and black and tan.

Ranging from 17 to 25 inches tall and weighing up to 100 pounds (although the average is 60 to 80 pounds), this mixed breed has an expected lifespan of up to 15 years. Possible health conditions that a Rottweiler Pitbull mix could suffer from include hip dysplasia, cataracts, and bloat.

Sometimes referred to as the Borderbull, these mixed breed dogs are known to be energetic as puppies. These independent dogs can be a challenge to train. However, given enough time and attention, the Pitbull Border Collie mix can be loving, attentive, and always ready to go the extra leap for its owner.

With solid bodies weighing anywhere between 25 and 50 pounds and standing around 16 inches tall, it is common to find these canines with blue, copper-red, brindle, or merle coats.

Separation anxiety can be an issue so be mindful about leaving Borderbulls alone for long periods of time. As active dogs, owners should be prepared to take them on lots of long walks. On the whole, this is a healthy breed with a life expectancy of 12 years. The only health concern of note is the potential for hip dysplasia. 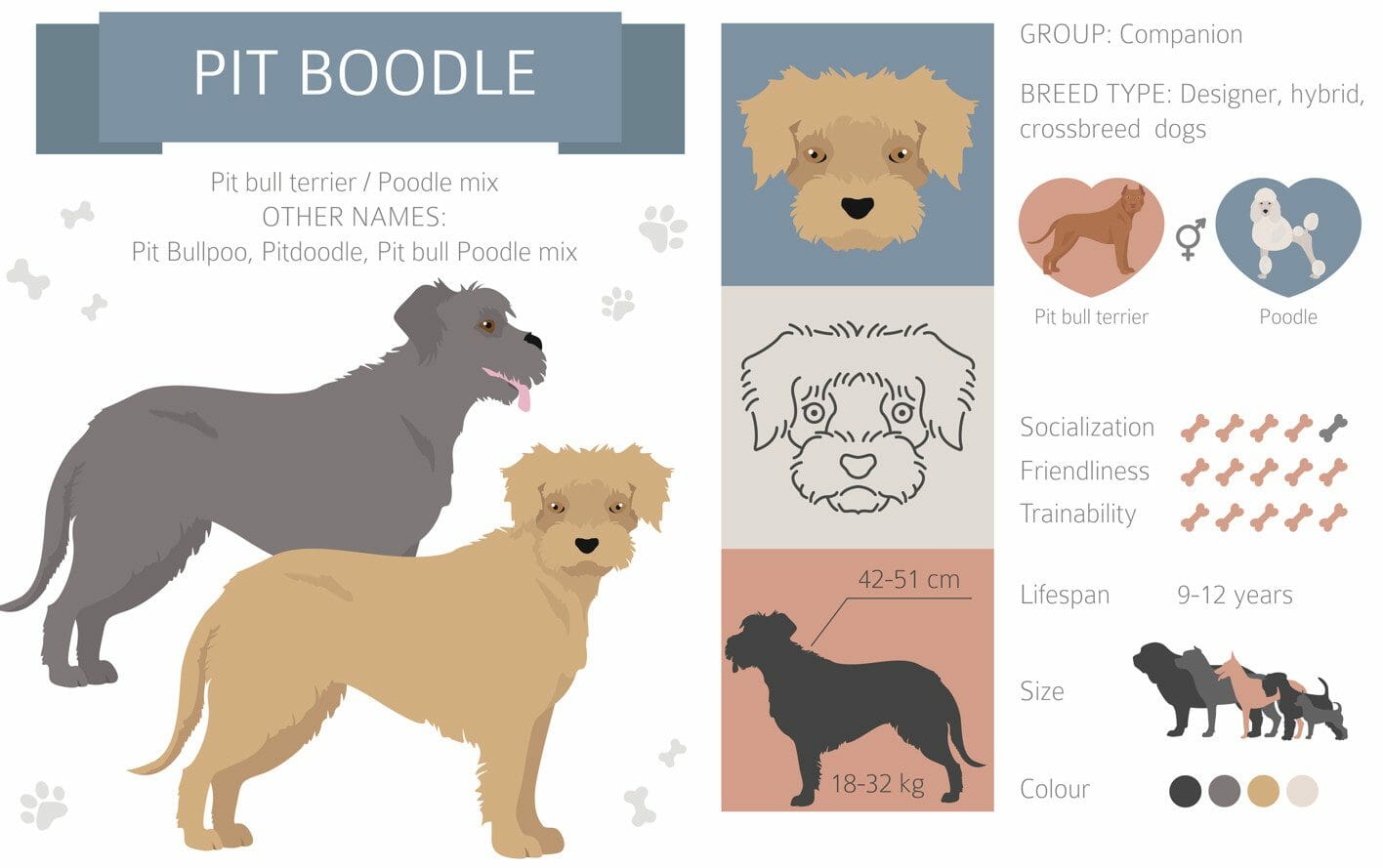 The medium-sized Poodle Pitbull mix is loyal, trainable, and devoted to their family. Depending on the size of the poodle used to breed these dogs, a Boodle can be as small as 30 pounds and 15 inches tall or as large as 85 pounds and 20 to 25 inches tall. Their appearance will depend on which parent’s physical traits dominate.

Usually, this crossbreed has a Poodle’s thick and curly coat, which can be a variety of colors. The average lifespan for these dogs is 9 to 12 years. Regular exercise and playtime are a must, as are early training and socialization. Potential health issues include skin infections, allergies, Addison’s disease, hip dysplasia, and epilepsy.

Hopefully, this list of top Pitbull mix breeds has been eye-opening and educational about the wide variety of interesting crossbreeds that come from mixing Pitbulls and other purebred dogs. For more information on various dog breeds, check out the BarkWiki breeds page.