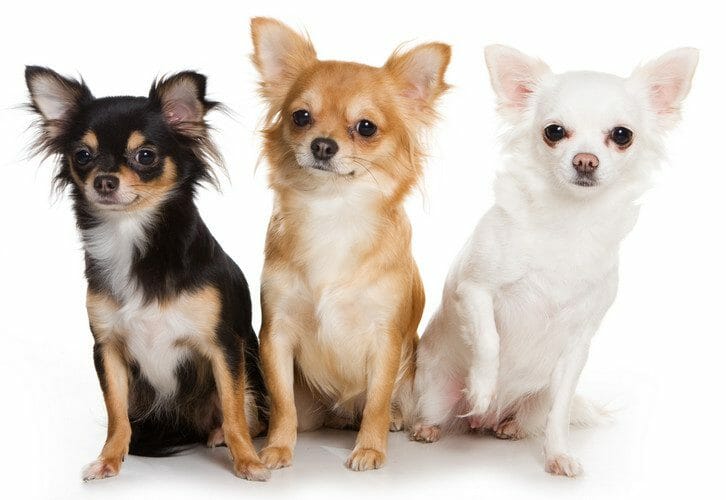 One thing can be said about the Chihuahua breed that is undeniable: for being the smallest dog breed in the world, it might as well have the personality of the biggest. Although strictly devoted to its family members, Chihuahuas often perceive everyone else as threats until proven otherwise. Some dogs within this breed remain silent and shy around strangers while others bark constantly.

Care should be taken to supervise these little pups when around other dogs. Often forgetting its size, this canine is not afraid to challenge dogs that may be triple its size and strength. With their high-pitched bark (or “yapping”), a Chihuahua never fails to let those around it know when it wants something.

Chihuahua are far more intelligent than many realize, often using this to their advantage by manipulating those around them. Because of this, without proper training as puppies, this breed can become an overconfident ruler of the roost. Unfortunately, many of these dogs never receive proper training, which often results in an ill-mannered and pushy canine.

On the other hand, Chihuahuas that are correctly trained are often sweet, devoted, and charming. However, no Chihuahua is ever completely deprived of its sassy “diva” moments. This breed is ideal for city living, given its compact purse-friendly size.

In terms of specific features of this breed, being very tiny is one of the most obvious. Possessing an average weight of 6 pounds or less, Chihuahuas would most likely need to be classified as a teacup dog if it was any smaller. In terms of height, this breed stands between 5 and 8 inches tall.

Aside from the different head shapes, the Apple Head Chihuahua tends to have more health problems than the Deer Head type, such as breathing issues related to the size and shape of their snout. (This is an issue shared by the French Bulldog and Pug breeds.)  They are also more likely to develop dental and eye problems.

As for its coat, Chihuahuas may have one that is either long or short. Its hair type is usually soft and silky. According to the American Kennel Association, this breed may come in any color or pattern. Many of these canines are a combination of two or more colors. However, the shades seen most frequently are:

There are countless other color combinations this breed may come in.

History of the Chihuahua

The roots of the Chihuahua breed have become twisted over time. While some say this breed was brought over to North America from China during the Colombian Exchange, others disagree. Although no one is sure how they got there, one way or another, these pups ended up in the hands of the Toltec people of ancient Mexico. At that time, however, this breed was much larger and was known as the Techichi.

Believing this dog played an integral role in the soul’s journey in the afterlife, the Techichis were revered as sacred. Once the 1100s came along, so did the Aztecs, who conquered the Toltec people. It was then believed that the Aztecs took the Techichi and began modifying its genetics to make it smaller.

Centuries later, some American tourists discovered the tiny breed in the Mexican state of Chihuahua and brought it back to the United States. By 1904, this breed was officially recognized by the American Kennel Club (AKC). Today, this ancient breed is ranked in 33rd place as one of the most popular breeds.

Below are some interesting tidbits of information about this famous breed.

As mentioned before, this breed can either have long, silky hair or short, smooth hair. A Long Haired Chihuahua should be brushed twice or more per week to detangle knots. Those with short hair should only be brushed and bathed as needed.

In spite of the distinct coat textures, both of these long and short-haired dogs experience moderate shedding. However, there are two times during the year where the shedding is much heavier.

This canine will also need its teeth brushed and nails clipped regularly. It is also important to keep its ears free of dirt build-up. Their large ears can get quite dirty, so gently cleaning them with a dampened cotton ball is recommended. This will help to prevent ear infections.

Chihuahuas can struggle with obesity. Therefore, vets suggest restricting the feeding of excess of treats, table scraps, and high-calorie foods.

Chihuahuas can be hyperactive, often allowing it to burn off plenty of calories throughout the day. Because of their petite size, these dogs usually get all the exercise needed in a small apartment.

In terms of training, it is important that this canine understands who is in charge of the household from a young age. If a Chihuahua puppy is given free rein, do not be surprised to find it obstinately asserting itself in every situation.

Possessing a lifespan of 14 to 18 years, Chihuahuas can live a long life if its health is kept up. However, many of these dogs contend with some notable health issues that are either congenital or have developed over time.

It is crucially important for a Chihuahua to undergo proper screenings early in life so preventative measures may be taken well in advance if needed. As indicated by the breed’s fantastic life expectancy, proactive choices to maintain their health as a puppy can pay off in the long run as they age.