The canine parvovirus (CPV), otherwise known as parvo, is a serious condition affecting the gastrointestinal health of dogs.  Puppies that are between the ages of 6 weeks and 6 months old are especially susceptible to the condition.

Parvo in dogs 6 weeks old or younger are less vulnerable due to the antibodies present in their mother’s milk protecting them.  This is only true if the mother received her full panel of parvo vaccines prior.

Although dogs of all ages can contract it, parvo in puppies is the most common, as it is extremely infectious and can even prove to be deadly if left untreated (90% mortality rate).

Most puppies contract parvo while in the process of being vaccinated for it, or if they are not vaccinated at all.  The earlier it is vaccinated, the less chance it has of getting parvo.

There are 2 main categories of parvo:

Interestingly, some dog breeds, such as the German Shepherd, Labrador Retriever, Rottweiler, and Doberman Pinscher, have been found to be more disposed to contracting parvo than other breeds. 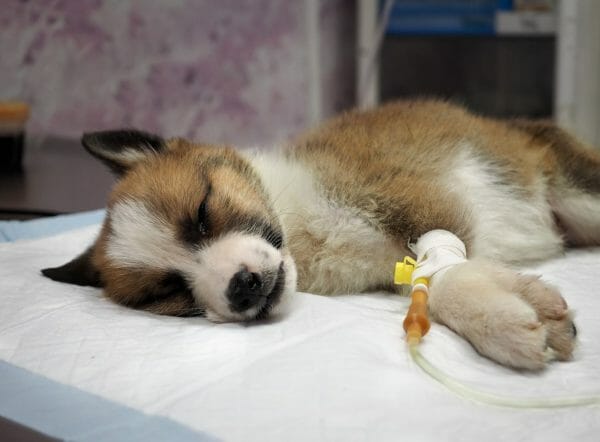 Following exposure to canine parvovirus, the dog tends to display parvo symptoms within 5 to 10 days.  Due to the critical nature of the virus, your vet should be notified immediately if the subsequent symptoms are present:

Dogs with the intestinal manifestation of parvo may be subject to further conditions such as sepsis and anemia due to the leakage of infected protein and blood from the intestines into the dog’s bloodstream.  In any case, parvo symptoms in puppies should be examined as quickly as possible by your vet.

How Do Dogs Get Parvo?

Parvo in dogs is contracted by means of direct oral contact with infected dogs, objects, or places.  It can also be contracted through the infection of its mother while it is still in utero, as previously mentioned.

The virus is extremely resilient, being able to withstand weather both hot and humid, as well as cold and dry for lengthy periods of time.  Infected feces are a common method of transference to other dogs, with even trace amounts carrying the virus.  Contaminated shoes, hair, and other objects can also carry the disease.

Signs of parvo can run rampant in kennels and shelters that house unvaccinated canines, where the virus usually has an abundant breeding ground.  Due to the strength and contagiousness of parvo, the infected dogs and environment should be isolated from other dogs.

Infected environments should be meticulously disinfected.  Bleach is the only known cleaning agent that works efficiently.  It is recommended to get professional advice from your vet concerning issues with keeping the virus quarantined.

Diagnosis and Treatment of Parvo

Parvo in dogs is currently being diagnosed with several of the following methods:

If the virus is detected and once the internal damage has been assessed, parvo treatments of various kinds will be suggested. 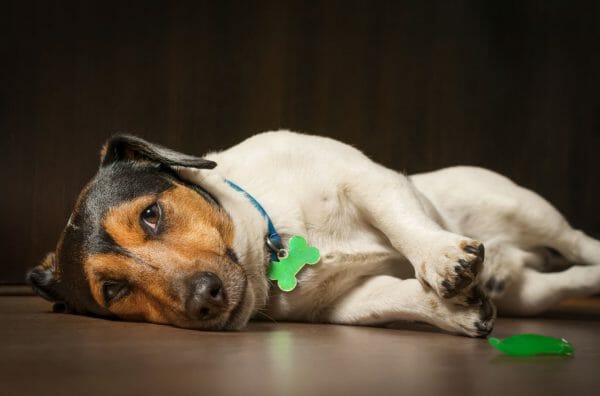 Dogs that have been diagnosed with parvovirus are almost always hospitalized for treatment.  Medications to combat diarrhea and nausea, as well as antibiotics are utilized.  IV fluids are essential in keeping the dog’s body fluids stabilized.

Replacements of natural protein and electrolyte levels in the pup are also administered.  Rehydration is a key element of survival in cases of parvo.  If the dog continues to recover and is sent home, your vet may recommend administration of oral medications to keep infections at bay.  In any case, dogs should be continually kept under close observation.

Even with the knowledge that there is no certain cure for parvo signs, infected pups that are immediately placed under the supervision and direction of a veterinarian have a survival rate of 68% to 92%.  Those puppies surviving past the 3 or 4-day mark usually recover entirely.

Can Cats Get Parvo?

Canines are not the only pets that are subject to this condition.  Cats can also get a form of parvo called Feline panleukopenia virus, or FPV.  Parvo signs in this cats are very similar manner to canine parvovirus.  In unvaccinated populations of cats, FPV is the deadliest condition for them to contract.

Cats with the virus are affected in terms of the cells within their intestines, skin, and bone marrow.  Cats that are pregnant, have a poor immune system, and those between the ages of 2 to 6 months are most vulnerable to the virus.

Can Humans Get Parvo?

Parvo in humans is quite unlike that of what is present in animals such as dogs and cats.  Common in childhood, the human parvovirus can pass directly to other humans.  However, it is not nearly as dire or dangerous to humans as it is to animals.

In humans with properly functioning immune systems, the course of parvo is short and mild, considering it lasts approximately a week.  It is spread through direct contact with other infected humans, like most illnesses.  The virus usually begins in rashes, low-grade fevers, and lethargy.

Unlike that of animals, parvo vaccinations for humans are not available.  Although the virus maintains a seemingly impenetrable resilience to medications, once the virus runs its course in the infected person, they are immune to any future contamination of it.

Gabapentin for dogs can help with pain management. Ask your vet if it’s right for your dog during Parvo treatment. Not all dogs and health conditions will work during certain treatments.