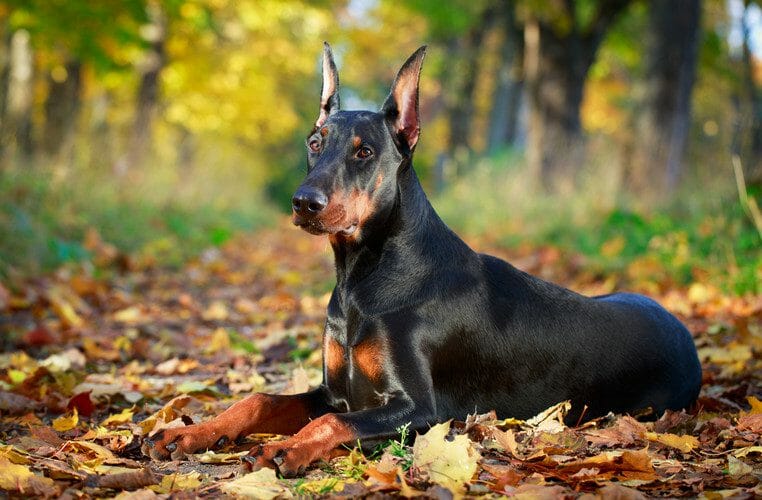 The Doberman (also known as the Doberman Pinscher) is a dog breed that exudes power and majesty. Once bred to be an intimidating guard dog, improved training methods have now permitted it to become one of the most trusted, devoted breeds of the canine world.

Known affectionately as the Dobie, Doberman Pinschers are extremely intelligent. They possess keen senses and quick reaction times, often allowing them to step up to protect those in the midst of danger. Acutely alert to threats, this breed is an effective watchdog and guard dog.

Unfortunately, Dobermans are often associated with negative and false stereotypes, such as it being too aggressive. Although it was originally bred to be a daunting guard dog, this is no longer the case. The Doberman temperament almost entirely depends on how a dog is trained and treated. Doberman puppies that are cared for properly and receive sufficient training end up being playful, outgoing, and loving. Once a Dobie develops a trusting relationship with someone, it exhibits a fierce, undying loyalty to that person.

This canine’s natural obedience and mental acuity make for easy training. Once properly trained and socialized, the Doberman can be a wonderful addition to a family, even those with children or small pets.

The Doberman’s appearance might best be described as dignified, strong, and commanding. Its body is large, powerful, and packed with muscle. This is especially apparent in the chest and shoulders. Its body shape allows it to be agile while maintaining high speeds and exhibiting significant endurance.

A Doberman’s head is long and quite narrow. It features a large nose, and intense, almond-shaped eyes. Its characteristic pointed ears stand upright and alert. Its legs are long and lean, allowing for swift movements. As for its tail, many Doberman puppies often have their tails surgically docked to a short stub. This practice is controversial and is banned in some countries. Another controversial surgery often performed on Dobies is ear cropping. 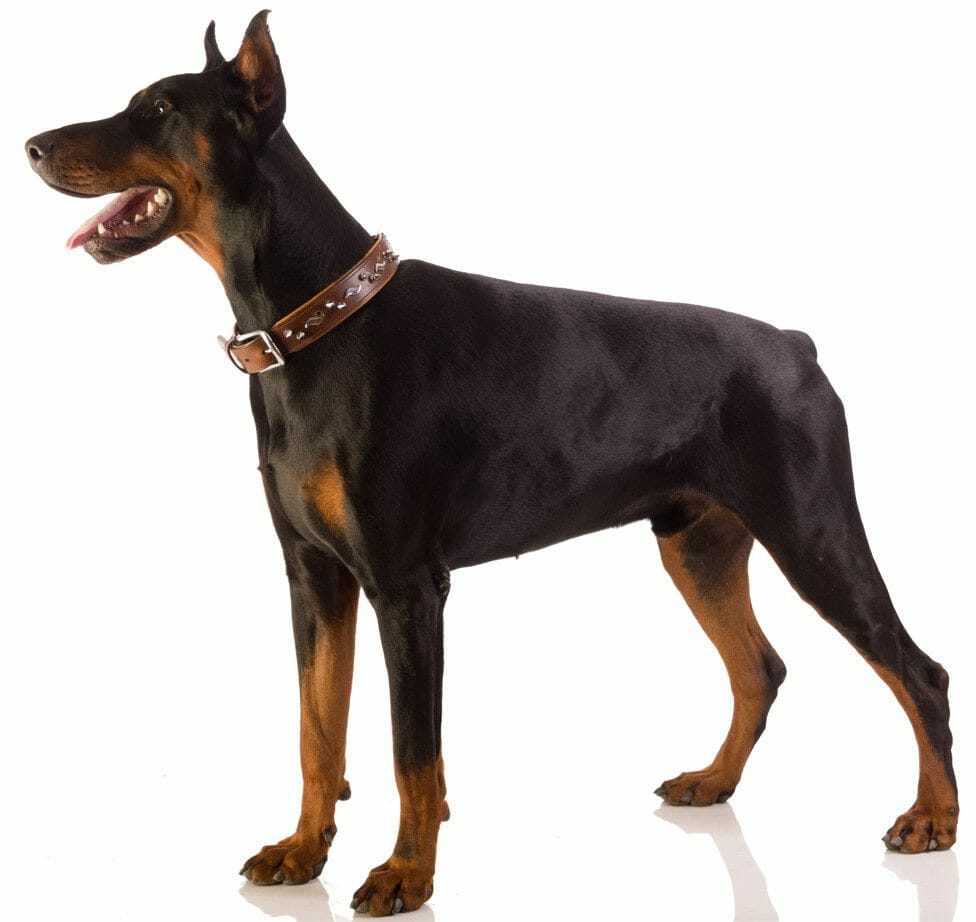 This canine’s sleek and short coat will gleam in the sunlight. Often coming in a vast array of colors, the Dobie usually has tan or rust-colored markings on its face, chest area, lower legs, and under its tail. The accepted coat shades for this breed include:

If both parents of a Doberman carry the Color Diluted gene (a recessive gene that dilutes coloring), a Black Doberman may end up looking blue (a grayish color that looks blue in some light). Red Dobermans with the same gene may end up producing fawn Dobermans. A White Doberman is an albino version of the dog. Although rare, White Dobermans have multiple health issues, such as photosensitivity, skin lesions, and skin cancer due to the albinism. 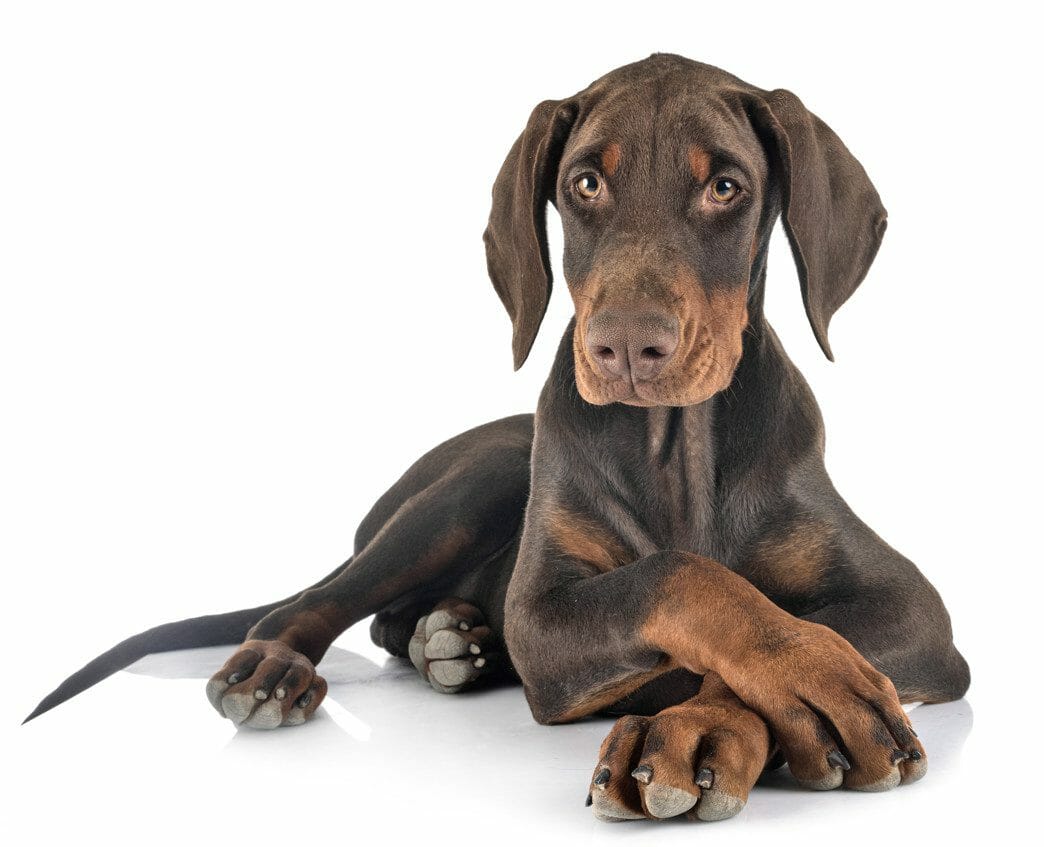 History of the Doberman

This regal Germanic breed’s roots go back over a century to Apolda, a town located in the central region of Thuringia, Germany. First developed by a tax collector by the name of Louis Dobermann, the breed was originally intended to be an unnerving guard dog and personal protector.

Over the years, the breed’s genetics were further developed to the modern standard by crossing various other breeds with it. It is said that Great Danes, Weimaraners, and Rottweilers were all breeds involved in crafting the breed that exists today. After being exported to the United States in the early 1900s, the Dobie’s imperial appearance and fascinating personality sparked an enthusiasm for the breed.

In recognition of the breed’s phenomenal strength, intelligence, and loyalty, Dobies were soon adopted as a working dog. Doberman often serve on military missions and police forces. This breed was especially integral to military missions taking place on the island of Guam in the Pacific Ocean during WWII. Sadly, many of those hero dogs lost their lives.

Whether working with the military, acting as a patient service dog, or winning at dog shows around the world, the Doberman has proven it can do it all—and then some. This remarkable, do-it-all breed was officially recognized by the American Kennel Club (AKC) in 1908. 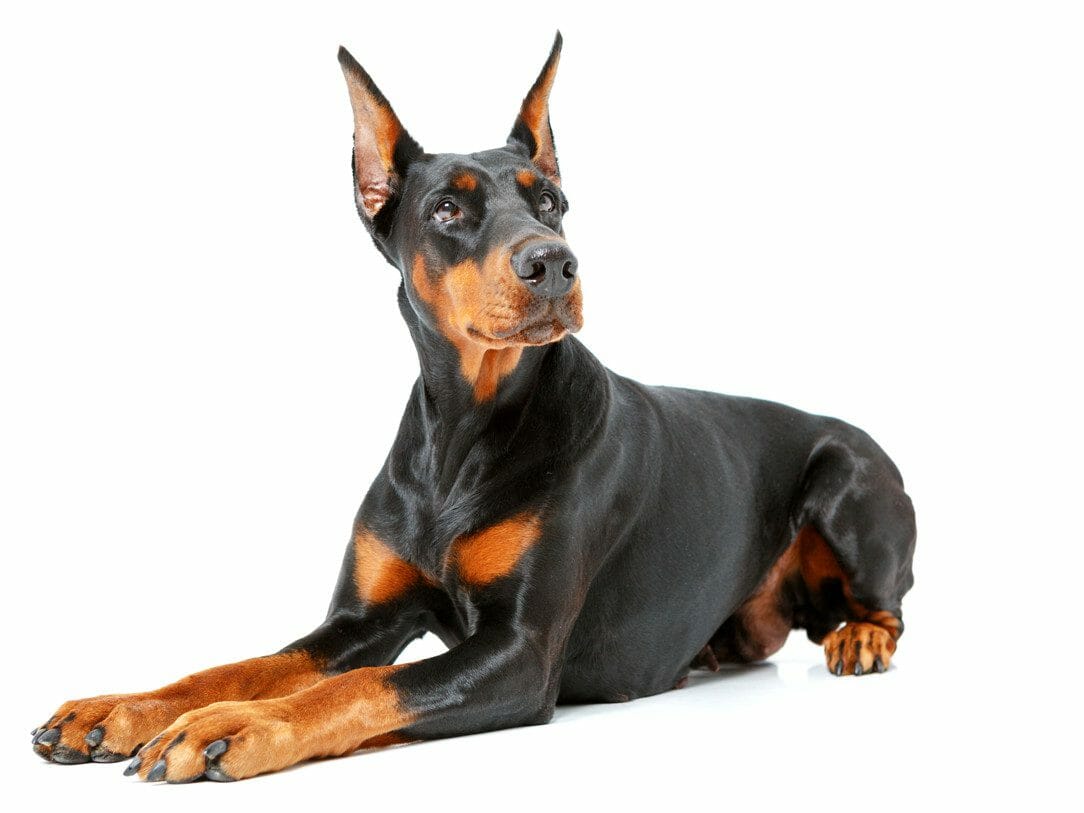 Dobermans shed frequently. In order to curtail the shedding of excess fur and keep its coat glistening, a quick daily brushing is recommended. Grooming mitts tend to work effectively on these canines. Baths should be given as needed.

Its large ears are often susceptible to the build-up of dirt and grime. Its ears should be gently cleansed on a regular basis to prevent ear infections. Trimming its nails and cleaning its teeth are also grooming requirements for this breed. 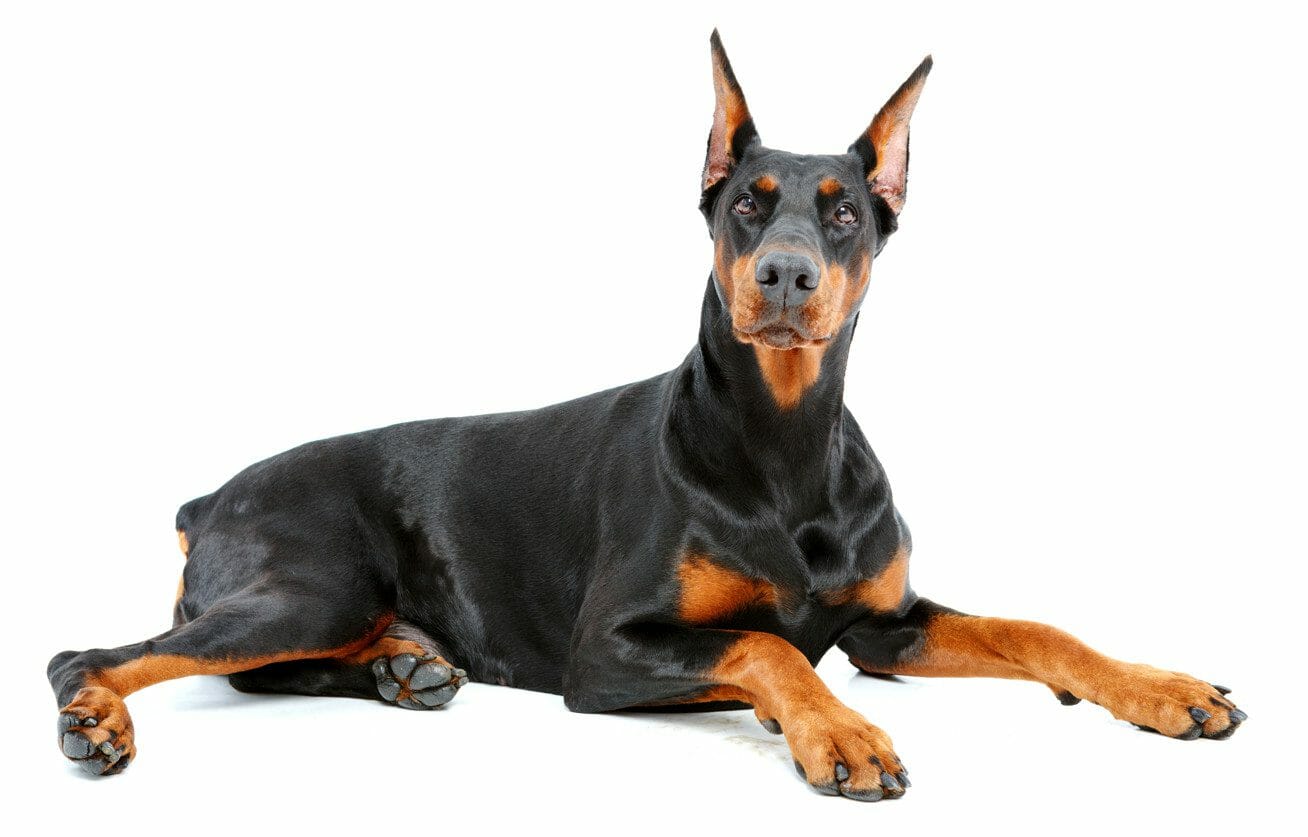 Obedient and always willing to learn, Doberman puppies should be exposed to socialization and obedience training early in life. This will also help keep boredom at bay. If training is omitted, Doberman puppies can grow up to become assertive and can easily begin misbehaving.

Furthermore, it is not advised to teach Doberman puppies how to guard and protect. Because these are innate traits of the breed, constantly reinforcing them may lead to unnatural hostility and over-protective tendencies.

Health Problems in the Doberman Breed

The lifespan of a Dobie ranges between 10 and 12 years old. Although these canines tend to be healthy for most of their life, there are always specific health concerns owners should be aware of. Below are the health problems that are frequently seen in this canine:

It is crucial for every dog breed to undergo the necessary evaluations and screenings as puppies. This often saves a lot of trouble down the road if the issue is spotted early.