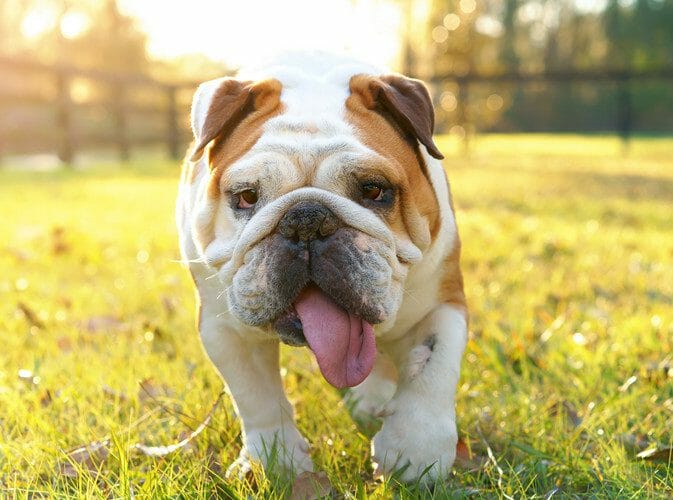 The English Bulldog (sometimes referred to as a British Bulldog or simply as Bulldog) is a medium-sized muscular dog with a distinctive wrinkled face and a snub nose. The breed should not be confused with the Old English Bulldog (which is now extinct) or the Olde English Bulldog, which is a modern American attempt at recreating the athleticism of traditional 18th-century bull baiters.

Despite their gruff appearance, English Bulldogs are both gentle and sociable. Renowned for its courage, these canines makes an excellent watchdogs. Although relatively sedate and stubborn, the breed is easygoing and will get along with most people.

Not known for its ability to learn quickly, once an English Bulldog has developed a new skill, it will be retained for future use. Typically, these canines don’t bark often, and their appearance is often enough to scare away their enemies. If introduced properly, an English Bulldog can comfortably share its home with other pets. 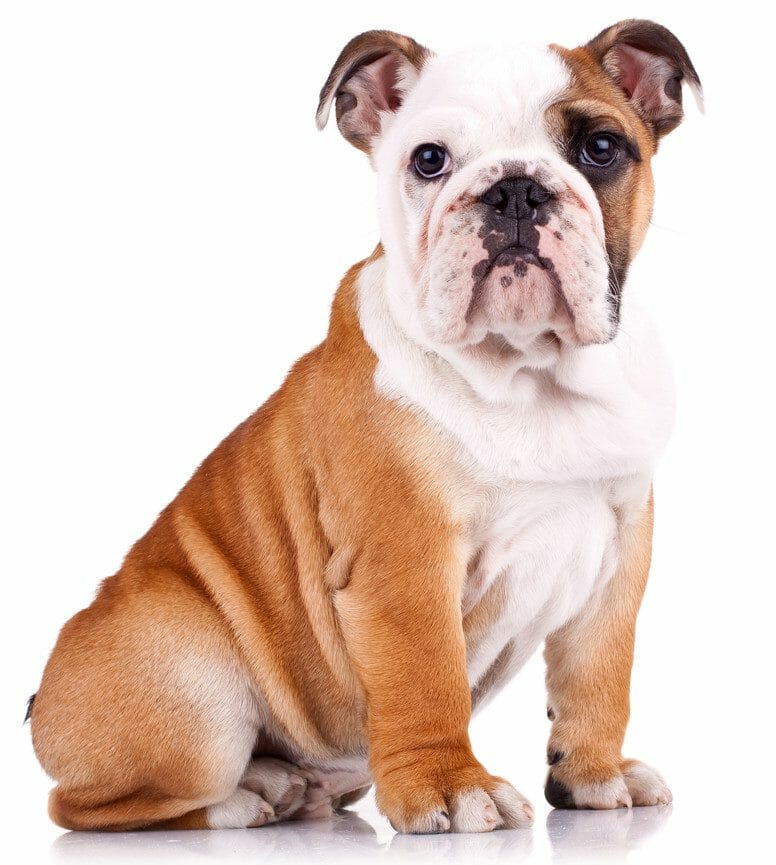 As with any dog, its personality will depend on several factors:

English Bulldog puppies are usually inquisitive and playful. They will approach humans and can be petted. Early socialization is a must for this breed, so owners should plan to expose these puppies to as many people, animals, sounds, and environments as possible. Puppy training classes are an excellent opportunity to introduce a puppy to other dogs and people. However, owners should find a trainer that teaches positive reinforcement techniques.

English Bulldogs are broad-shouldered, medium-sized dogs with compact bodies and short legs. The head is proportionally large with folds of extra skin surrounding the forehead. The dog’s muzzle is short and wide, and the broad nose has big nostrils.

The distinctive facial features also include dark deep-set eyes, small rose ears, and a broad square and enlarged jaw. Bulldogs should also have a noticeable underbite. An English Bulldog’s coat will be short, glossy, flat, and straight. 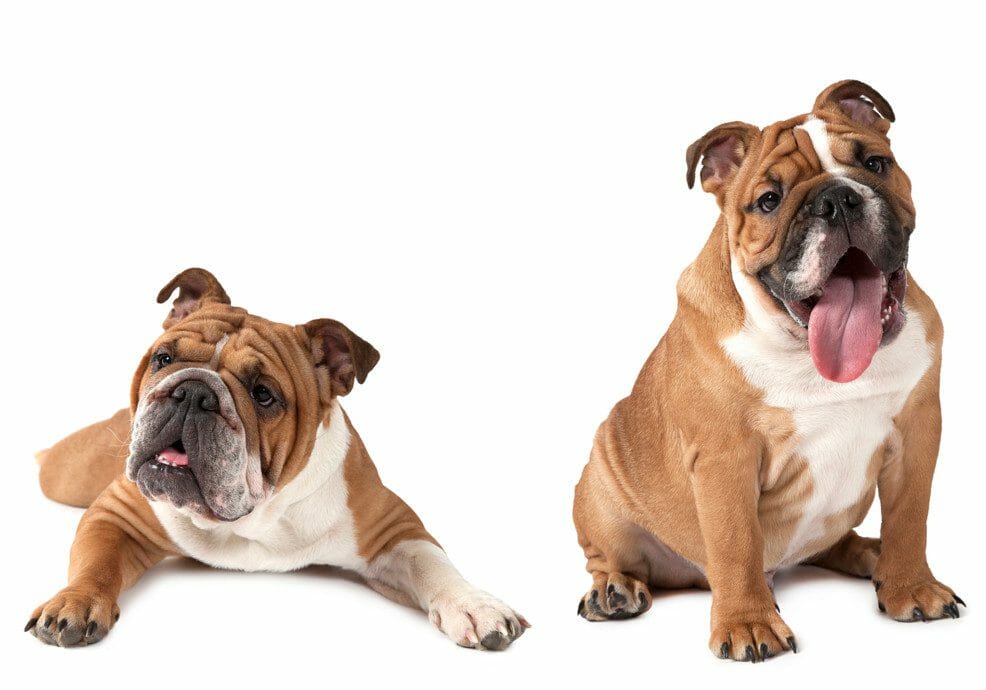 English Bulldogs can come in a variety of colors: 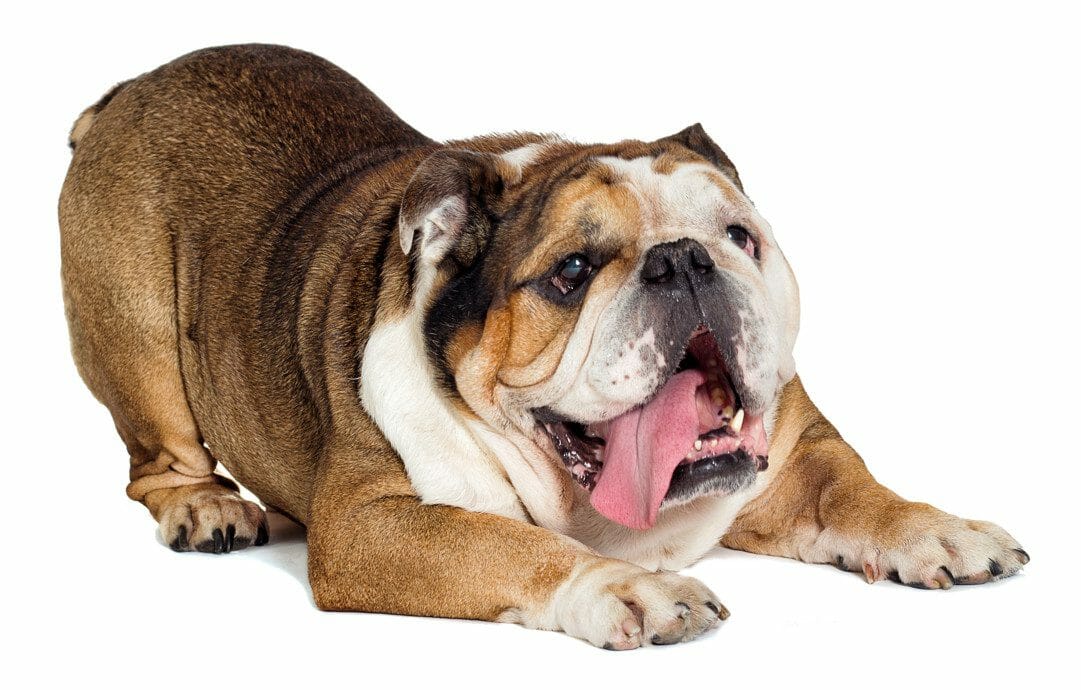 Compared to other breeds of dogs, the English Bulldog lifespan is about 30% shorter than average. The average lifespan is between 8 and 10 years. Regular visits to a vet and providing recommended vaccinations (such as those for rabies and parvo) will help to keep these canines healthy. BarkWiki also recommends providing preventive medication for fleas, ticks, and heartworms.

Brachycephalic syndrome is a concern for this breeed. This condition can affect a dog in several ways. The most notable is overheating. Brachycephalic airway obstructive syndrome (BOAS) is categorized by small nasal passages that decrease the flow of air needed to cool the body. A short nose and flat facial features are the principal causes of BOAS.

For this reason, English Bulldogs should not be kept outdoors. In addition, exercise should be limited to short walks during the cooler times of the day. Always ensure these canines have access to plenty of fresh water and use air conditioning indoors where possible.

Dogs that have this condition will snort frequently. BOAS surgery to widen the nostrils and shorten the palate may be an option.

A series of eye conditions can also affect English Bulldogs. 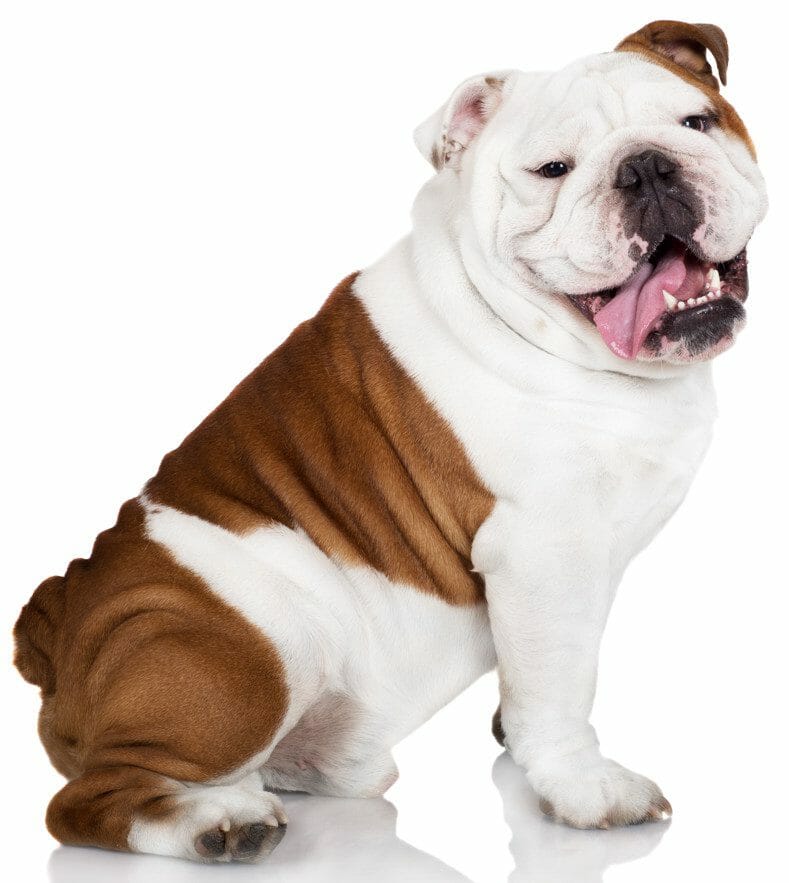 The first mention of Bulldogs comes from a letter written in 1631 by Prestwick Eaton, in which he requests “two good Bulldogs” to be sent on the first ship. Three decades later, an English scientist named Christopher Merret mentioned a “Butcher’s Bull or Bear Dog” in the Pinax Rerum Naturalium Britannicarum.

Typically used in the sport of bull-baiting, these dogs would be set onto a restrained bull. Bets would be taken on which dog would grab the bull by the nose and pin it down first. Often, several dogs would be killed by the bulls at these events.

The sport was brought to the United Kingdom by the Normans in the 12th century. However, it was typically Mastiffs that would fight. Over time, Mastiffs were replaced with Bulldogs on account of their strong jaws. As the years progressed, selective breeding was used in the sport to make English Bulldogs stockier, with bigger heads and more aggressive temperaments. In 1835, bull-baiting was outlawed in England, along with other similar sports such as bear-baiting and cockfighting. Because of this, the Bulldog was no longer of use. 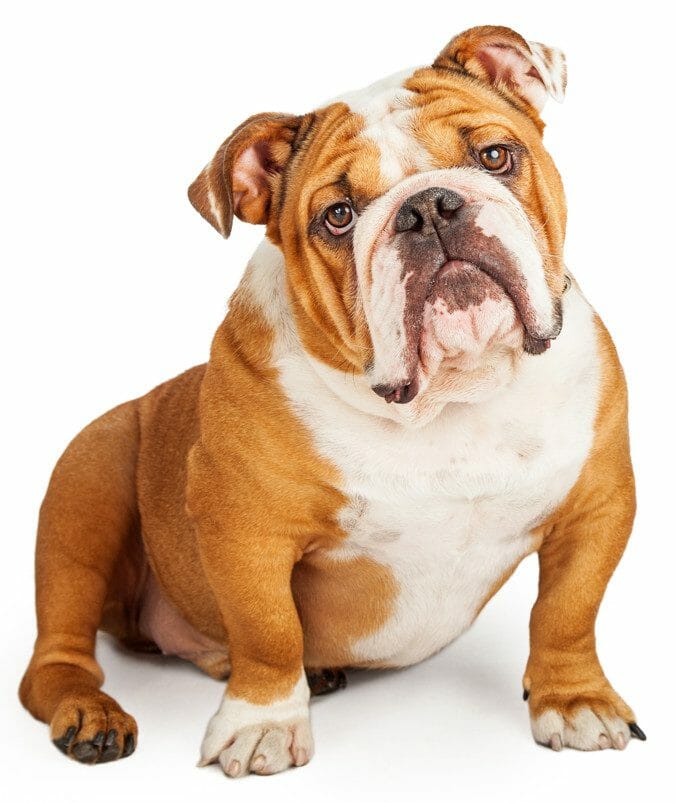 From the mid-17th century, English Bulldogs found renewed purpose in New York when Governor Richard Nicolls implemented a cleanup operation to help catch wild bulls that were plaguing the city. Although they may appear tough, the breed is no longer capable of its previous role as they are unable to run after or be thrown by a bull. The modern English Bulldog’s shorter muzzles also prevents it from gripping a bull. As a result, modern English Bulldogs have a much calmer demeanor.

The first Bulldog Club was established in 1864. However, it closed within three years with its only legacy being the first detailed description of the breed laid out in the Philo-Kuan Standard. When The Kennel Club was set up in 1873, Bulldogs were included in the first stud book. The first English Bulldog to be registered was born in 1864 and was called Adam.

Another organization called “The Bulldog Club Incorporated” started in London in 1875. A new standard for the breed was introduced, and the organization would go on to be the world’s oldest kennel club and is still in existence today.

Synonymous with British culture, the Bulldog is said to represent the nation’s values. The breed was personified during World War II when British Prime Minister Winston Churchill became known as “the Bulldog.”

Before looking for English Bulldog puppies for sale, always check local rescue shelters. There are often several English Bulldogs for adoption as they are a popular breed. When taking in an English Bulldog rescue, choose a no-kill shelter that does not euthanize animals.