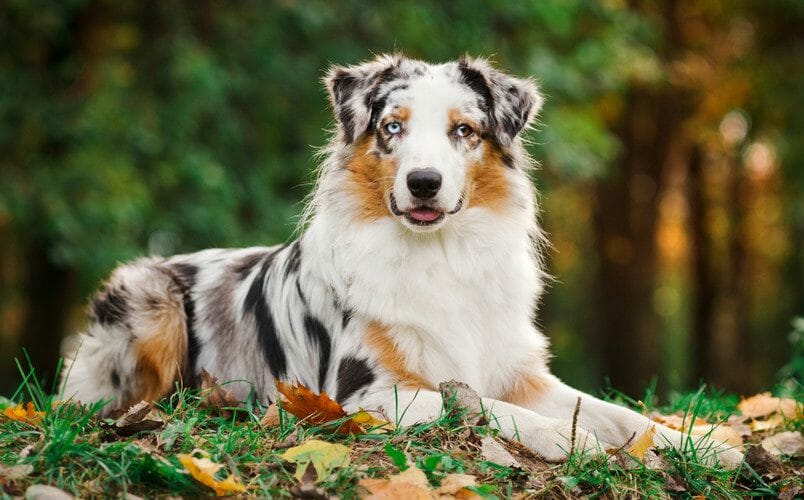 If there was ever an animal that loved work more than play, one should look no further than the Australian Shepherd. As a member of the Herding Group, the Australian Shepherd is notoriously known for its inborn abilities to guard and wrangle. Whether it be cattle, small animals, or even children, these herders are instinctually driven to round up anything that moves.

Due to its sharp mind and intense drive to be active, Australian Shepherd are commonly seen steering cattle on ranches, running rodeo circuits, sprinting around training courses, or strategically navigating police scenes.

These canines may initially come off as independent and standoffish, especially with strangers. This is mostly due to an “all work and no play” mindset. However, despite its intelligence and self-sufficiency, this exuberant pup can make a fantastic family pet. It can be both playful and protective of family members. As long as it’s allowed to exert pent-up energy and engage in plenty of daily physical activity, these dogs can adapt to any lifestyle with ease.

Though this renowned herding animal possesses a strong, resilient body, Australian Shepherds also remain capable of moving with graceful agility and swiftness. These canines possess a feathery tail that is naturally short in length. It may be docked if it is a laboring dog. This is done both to prevent injuries as well as designate its status of being a worker.

One of the Australian Shepherd’s most striking characteristics are its piercing icy-blue eyes. Round in size, the eyes are a highly-coveted feature when it comes to breeding. Its ears are triangular and floppy. Its gorgeous coat most commonly has a red or blue merle pattern. (Merle refers to a genetic pattern that can appear in a dog’s coat. The merle gene creates mottled patches of color in a solid or piebald coat, blue or odd-colored eyes, and might affect skin pigment.)

Despite having the ability to move nimbly with precision, Australian Shepherds have a muscular build. The medium-sized bodies are proportional with the length only slightly exceeding the height.

Australian Shepherds normally has a thick double coat that is moderately long. It may have naturally straight or wavy fur. Around its head, it has a lush, wispy mane.

The beautiful coat will normally feature a red or blue merle design. However, one or more of the following colors and patterns may be present:

Red or blue merle patterns consist of a diverse array of marks, such as splotches, marbling, and flecks.

According to the American Kennel Association, the Mini Australian Shepherd is quite popular. Weighing between 20 and 40 pounds and reaching a maximum height of 18 inches, the devoted little dogs hold 34th place in the association’s popularity rankings.

Contrary to its name, the Australian Shepherd has its roots in a small region of Europe known as the Basque country. Sitting snugly between France and Spain, the Basque region is located in the western part of the Pyrenees Mountains. These hardy shepherds became world-renowned wranglers in this small mountainous region. The canine’s exceptional herding skills attracted the attention of ranchers and farmers across the country.

Down Under. In order to fully take advantage of the reliable pups, ranchers from the Basque region decided to take groups of Australian Shepherds to Australia, where miles of farmland and pastures remained untouched. After its abilities became known far and wide, these dogs were further bred with Border Collies in order to expand the breed.

On to America. The Basques, having staked a claim in the Australian countryside, set sail to see what America had in store. Arriving in the late 1800s, the dogs quickly became a staple on farms and ranches in the western United States. After erroneously assuming its Australian roots, Americans bestowed the name of Australian Shepherd upon the devoted pups, thereby sealing its fate as a staple in Western culture.

Listed below are some fascinating facts about Australian Shepherds:

Due to its versatile nature and remarkable features, it is commonplace to see the Australian Shepherd mix with one of the following breeds:

Its striking blue eyes and beautiful fur contributes to the creation some of the most stunning mixed breeds.

Brushing should be done weekly in non-shedding seasons. The thick double coat will be shiny and knot-free if consistently brushed. A wire brush may be used. Baths may be needed more frequently because of all the time spent outdoors.

An Australian Shepherd puppy that grows up with no training whatsoever may turn out to be rambunctious, overprotective, and territorial. Because of this, classes in socialization and obedience are strongly recommended during puppyhood. Mini Australian Shepherds are also highly trainable and would do well with early instruction.

Because of its high energy and exuberance, the need for intensive daily exercise is also high. These little busybodies should not be left alone for long periods. Giving your canines little jobs to do that requires physical activity will leave them happy and mild-natured.

As long as daily exercise and a healthy diet remain a consistent part of its life, this canine can live a long, vigorous life.