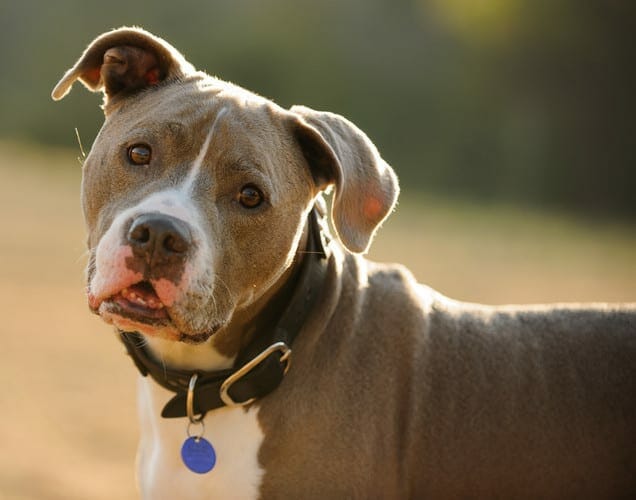 In spite of some of the widespread stereotypes attached to Pitbulls, the American Pit Bull Terrier is, in reality, a lovingly affectionate dog. These canines adore human company, often willing to do anything to please its family members and receive affection in return.

The American Pit Bull Terrier temperament is very playful, good-natured, and may even be friendly to a fault. Surprisingly, these dogs tend to be especially gentle and patient with children.

Unfortunately, a Pitbull’s innate confidence, strength, and protective tendencies are often misused and misconstrued. It is important to keep in mind that any dog is the product of their training and living environment.

Therefore, with proper training and loving care, Pitbulls are very sweet, calm dogs. Any aggression toward humans is unheard of in an appropriately trained American Pit Bull Terrier.

The American Pit Bull Terrier is a medium to large-sized dog that is sturdy and full of densely packed muscle. Its muscle is especially apparent around its neck area. The body shape is often longer rather than tall.

The American Pit Bull Terrier’s bulky, flat head features wide-set ears and eyes. Its eyes are almond-shaped yet quite small in proportion to the size of its head. As for its ears, both are often cropped and pointy. However, if left uncropped, the ears are bent forward and triangular in shape. Initially designed to be a fighter in centuries-old wars, this canine has a powerfully large jaw. Its tail is usually skinny and tapered at the end.

The coat may be one solid color or have a tuxedo pattern, where the entire neck and chest of the dog features a white color. A Brindle American Pit Bull Terrier refers to a dog that has a brindle coat (e.g., brownish or tawny fur with streaks of another color). 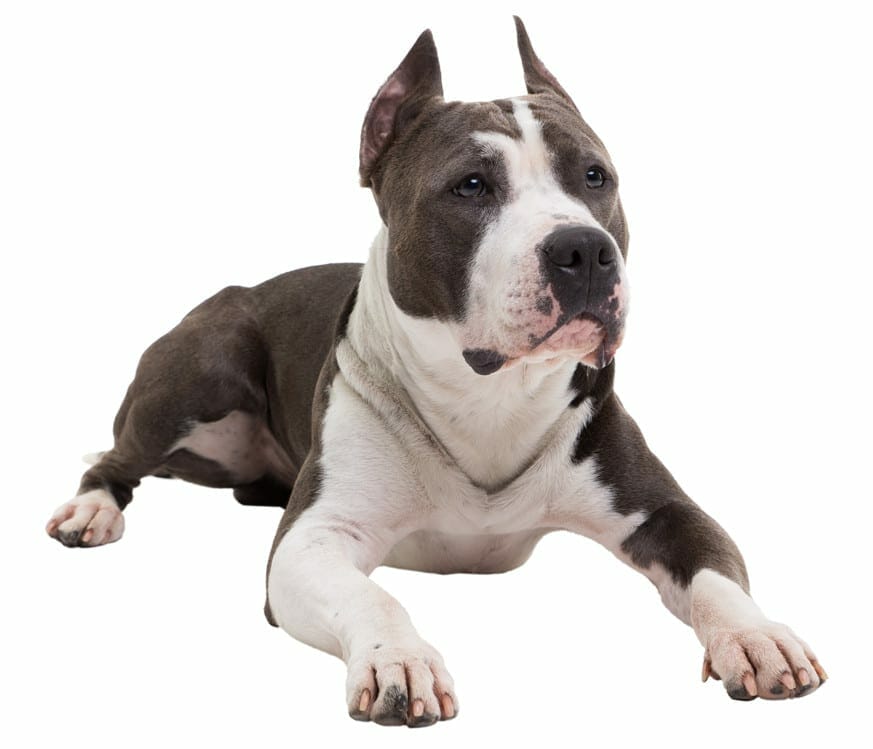 Given its muscle density, Pitbulls often weighs far more than expected for its size. Both males and females may possess a weight ranging between 30 and 90 pounds.

When it comes to height, both sexes may get to be between 17 and 20 inches tall during adulthood.

The American Pit Bull Terrier has its roots deep within the countries that make up the United Kingdom. In the early 1800s, breeders began efforts to produce a canine with strong fighting genetics.

In order to do this, breeds such as the English Bulldog and the English Terrier were crossbred to produce the popular hybrid breed that exists to this day, the Pitbull.

The Pit Bull was primarily used in fighting matches with wild animals, such as bears or bulls. This was a fight to the death. This horrific blood sport was brought to a decisive end with the passage of laws protecting animals like the American Pit Bull Terrier in 1835.

However, this was not an end of the mistreatment and misuse of this breed. The breed was then widely used for the cruel activity of dogfighting. Gamblers often made bets on dogs and let them fight each other ruthlessly. 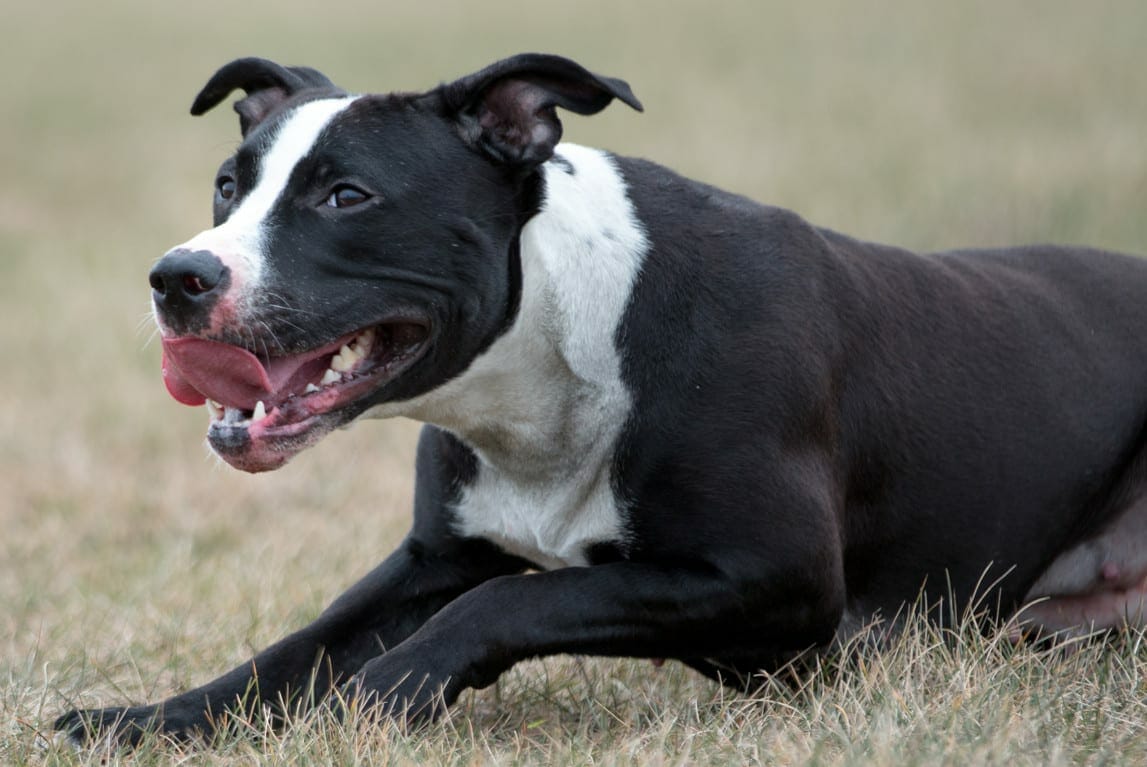 Unfortunately, with the Pitbull’s introduction into the United States in the latter half of the 19th century, many dog associations wanted nothing to do with the infamous breed. Even to this day, the American Kennel Association has not formally accepted this breed. However, both the United Kennel Club and the American Dog Breeders Association do officially recognize the breed.

There is a hope for a greater acceptance of Pitbulls. This is thanks to the efforts of knowledgeable breeders that are working hard to produce Pitties that truly represent the breed as friendly, affectionate, and kind.

How to Care for an American Pit Bull Terrier

In terms of coat health, regular brushing and bathing are essential for a shiny coat. Its nails should be kept clean and trim as well.

The level of shedding in Pitbulls can vary. Some Pitbulls shed heavily, while others are only moderate shedders. Daily brushing will inevitably keep the hair loss down. 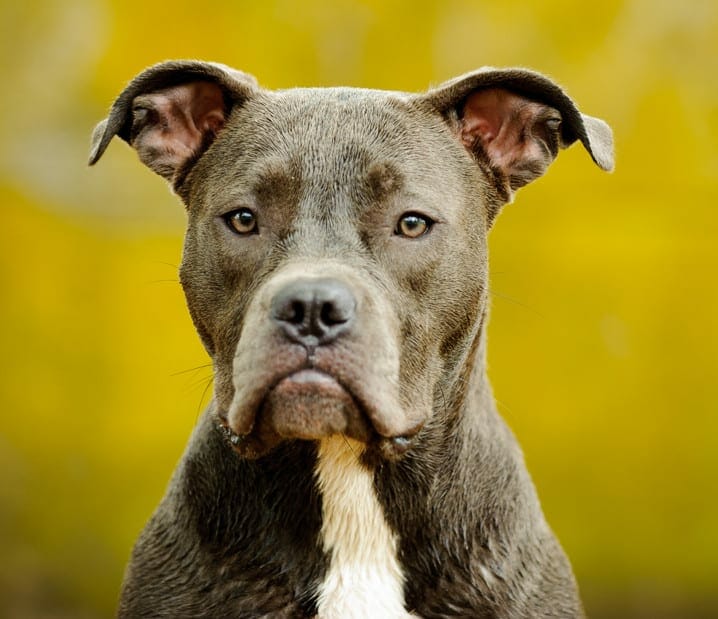 This bright, outgoing dog needs daily, intensive exercise—both mentally and physically. These dogs were bred to excel in sports and outdoor activities, so allowing them to frequently engage in them will be extremely beneficial not only to the dog’s health but to its behavior.

A bored Pit Bull often turns into a destructive one. Whether it be tearing up furniture or developing maladaptive habits, Pitties may adopt these activities if not given proper time to exercise. Appropriate exercise will provide the outlet this breed needs to spend its energy in a beneficial way. Caution should be taken never to allow this breed off its leash in public. Otherwise, it may bolt to chase after or confront another animal.

Pitbulls require extensive training in socialization and obedience throughout its life. Training can be a fantastic way not only to bond with a pet but also to provide it with structure and confidence in itself. If properly trained, American Pit Bull Terriers can be fantastic, loyal companions to people of all sizes and ages.

Early screenings along with frequently scheduled check-ups at the vet are both integral aspects of keeping any breed in optimal health. Many Pitbull puppies can come down with Parvo, too. Make sure and get your new puppy checked out and vaccinated right away.  Many dog owners are not sure if they can give Gabapentin to dogs for pain, so be sure and read the important article. BarkWiki continues to add dog health issues and new dog breeds all the time, so check back every week.