Prevention with Genetics and Breeding

The German Shepherd breed is one of the most highly sought after breeds to purchase, and for good reason.  Their loyalty in friendship and diligence through hard work and training makes them a breed that is suitable for a diverse range of living situations. However, German Shepherd owners must be careful not to overwork them due to their increased risk of getting hip dysplasia.

Before falling head over paws for these sweet but confident companions, prospective dog owners should be wary of the potentially debilitating diagnosis that so many German Shepherd dogs face.  A diagnosis of hip dysplasia affects almost 20% of all German Shepherds.

In order to avoid receiving a diagnosis of hip dysplasia in German Shepherds, there are key preventative measures that should be taken both in terms of breeding and testing.

In the German Shepherd breed, hip dysplasia can be categorized as the common musculoskeletal condition whereby the femur and pelvis of the hip joint do not match up fittingly.  This creates a painful, hobbled walk in a dog that can progressively worsen with time, sometimes coexisting with osteoarthritis.

The diagnostic assessments and treatment measures associated with this condition are completely dependent upon the severity of the case.  Some cases may be minor enough to where a few lifestyle changes can eliminate the issue.  Other cases may be severe enough to where a German Shepherd is unable to walk without assistance.

Hip dysplasia is a serious condition for this breed and should be taken very seriously if signs of it are being observed.

If a German Shepherd dog is suffering from hip dysplasia, they may exhibit some of the following symptoms:

While some of these may go unnoticed at first, the ever-worsening gait of the dog is a tell-tale sign that it should be examined by a vet.

In one study done on the genetic expression and genetic causes of hip dysplasia in German Shepherds, researchers were able to determine that through some gene deletion, this condition could be altogether avoided in at-risk breeds like the German Shepherd.  Although the genetic aspect of the condition is in the early stages of research, studies like this provide hope for a potential in-vitro cure in the future.

This finding is crucial to the prevention of hip dysplasia.  Because of this, it logically follows that to catch hip dysplasia early, German Shepherd puppies should be thoroughly examined early in life.

If the beginning stages of hip dysplasia are found in a German Shepherd puppy by a vet, much can be done to slow and prevent the progression of it as much as possible.

The Earlier the Better

Almost all symptoms of hip dysplasia do not come to fruition until the dog reaches adulthood.  By this time, most cases are well advanced in terms of severity.  For this reason, preventative measures at this stage are usually futile.

When hip dysplasia is discovered in adulthood, treatment rather than prevention is the focus of the vet in making dogs as comfortable as possible with the diagnosis.

While a poor diet, obesity, and injuries can all be facilitators, including genetic predispositions are the primary factor in terms of causation.

Unfortunately, most pet owners are unaware that German Shepherd puppies can easily conceal a condition such as hip dysplasia in their young age.  It is not until they are much older that the symptoms begin to appear.

One of the best ways to curb the possibility of hip dysplasia in this breed is to simply not feed the puppies too much.  Some parts of the dog’s body can grow faster than the others, so regulated eating schedules prevent the puppy from eating disproportionately and gaining too much weight too fast.

As hard as it may be, puppies should refrain from excessive exercise and playtime.  Constant jumping and running can put too much stress on the joints and can accelerate the process of having a dysplastic hip.

Because the German Shepherd breed is so coveted amongst dog and animal lovers alike, breeders like to dishonestly take advantage of this when it comes to conditions like hip dysplasia.  To make as much money as possible, some German Shepherd breeders knowingly breed dogs that are diagnosed with the hip condition and pass them off as healthy.

Buyers must be vigilant and wary of breeders that lack credentials and a solid reputation.  Certified breeders will ensure that a dog with this condition is not bred.

If a German Shepherd is purchased by a breeder, the breeder should hold certification from either the Orthopedic Foundation for Animals (OFA) or PennHip that the dog is not subject to dysplasia of the hip.  This will guarantee that the dog has previously been scanned by means of an X-ray to rule out hip dysplasia.

In the case of the breeder not knowing if the dog has been tested for dysplasia or not, it is recommended that the dog only be purchased if the breeder is willing to get this done beforehand.  If this is refused, the breeder’s credibility should be reconsidered. 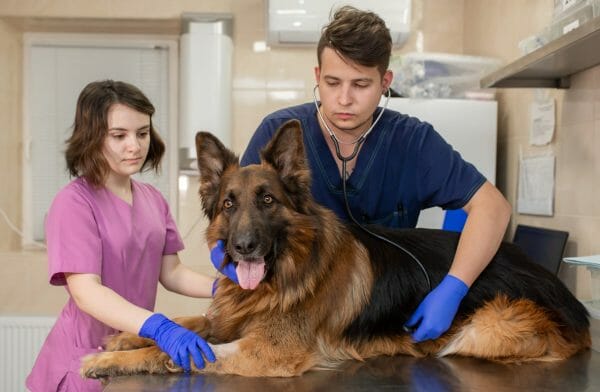 The best treatment begins with preventative measures early in life.  As previously mentioned, the best-case scenario for German Shepherd puppies is to get screened as early as 4 months old.  That way, if hip dysplasia is observed in the early stages, it will be made known to the owner and can be accommodated for through various treatments throughout life.

German Shepherds with hip dysplasia should be monitored in how much food they consume and how they exercise.  It is highly recommended that a low-calorie diet be followed in order to keep the weight off the affected joints.  Exercise should be moderate but frequent to keep the joints as flexible as possible.

Some German Shepherds may require medications to combat the pain from the grinding of dysplasia at work in the hip joints.  Inflammation of the joints is also a painful affliction, so anti-inflammatory medications are often prescribed.  In cases where the hip dysplasia is severe enough, surgical operations may be the only option.

We’ve got more German Shepherd facts for you!